TRENDING
Go to DASHBOARD > Appearance > Menus to set up the menu.
Navigate
2981 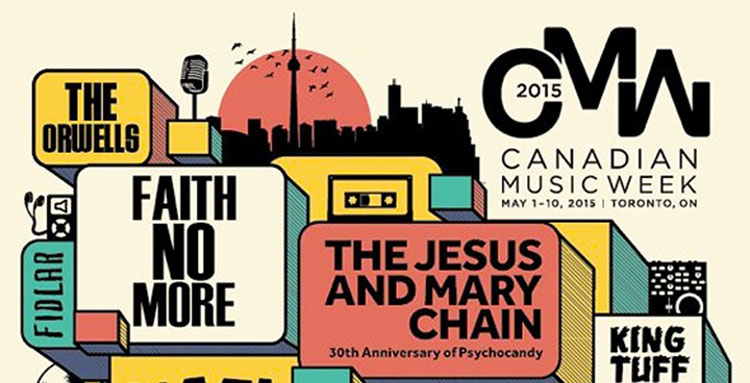 With SXSW and Coachella behind us, it’s time to turn our attention north. Canadian Music Week is a nine day festival showcasing both local and international talent. The fest has graduated from bitter March to balmy May, inviting the less cold resistant music fans. With an overwhelming number of artists, this year is sure to be bigger and better than anything before.

CMW has always been a kick off for Canadian festival fever. Artists come from all over the world and Canadians brave the TTC to see them. With over 1000 artists performing in multiple venues around the city it can be a daunting task trying to find an act to see (a colleague of mine spent 20 minutes scrolling and counting the colossal artist list).

That’s were we come in. We are here to save you the trouble of fumbling for change, frantically scrolling through maps, and spending hours trying to find that one perfect sound. Here’s our pick for artists you should definitely check out during CMW.

FIDLAR/ May 1st/ The Great Hall

With one of the best names in music right now, Fuck It Dog Life’s a Risk, FIDLAR’s set is sure to be raw, aggressive, and full of energy. The band is the musical representation of a rowdy house party and we’ll be sure to check these Los Angeles locals out.

His sound brings a groovy, infectious modern taste of the syrupy rhythm and soul of the 60s. As he repeats in his popular single “Coming Home”, Bridges “wants to be around, girl.” We expect the young Fort Worthian and his old blues sound will be here to stay.

These London, Ontario locals are bringing pop punk/emo back in the best possible way. Their melodic sound and catchy lyrics are infectious and will be sure to have you singing and nodding along.

The Cool Hands is a highly energetic blues punk band from Toronto, Ontario. Favouring rhythmic melodies and abrasive vocals this band is proof of the amazing punk scene in Toronto.

Of Monsters and Men/ May 4th/ Massey Hall

I shouldn’t even have to sell you on these guys. Just listen to them, then get to their show.

Dirty Frigs/ May 5/ The Garrison

Emphatic drums, dark guitar, and murky voices – all of it loud – make the Dirty Frigs as dangerously tempting as the dirty, harrowing, drug-induced lust in a grindhouse film. This grunge psych rock band is sure to deliver a dizzyingly fun show.

Local Torontonians Xylk Lorena and Angela Abrenica have eased into a comfortable, compelling funk that tells the tale of youthful life in the city. Their eclectic beat is a convergence of startling and reassuring sway-worthy hip-hop.

The Wild Romantics/ May 7th/ The Cave

This Vancouver based duo will be sure to tug at your heartstrings. The duo comprised of Evan Miller and Aliesha Kalina harmonize beautifully and their folk sound is an ode to summer.

The Resignators/ May 8th/ Horseshoe Tavern

Playing at the aptly named Aussie BBQ this Melbourne based ska band is simply fun and energetic. Combining ska with a wide range of other musical influences, The Resignators bring with them an innovative and awesome sound.

This no bullshit punk band hailing from London, Ontario is sure to put on a raw and aggressive show. Their lyrics are intelligent, witty, and quite often funny while at the same time being catchy and melodic. They explode with a feral energy and their live shows always carry an energetic tension that blends amazingly with their sound.

Pronounced “Always” these Toronto locals have been blowing up since their debut self-titled release. The band has found a comfortable mix between indie and surf pop, and their innovations pay off in a hauntingly beautiful sound. The Toronto quintet has already caught the attention of Rolling Stone, NPR, Pitchfork, and Sterogum, so it comes as no surprise that we’re recommending these guys for you.

This indie rock/punk/emo band from Cleveland, Ohio is both ferocious and incredibly melodic. The band is at the forefront of the emo revival and they’ve taken the genre back to it’s heydey. With beautiful lyrics that any listener can connect with, Cloud Nothings is a band you won’t want to miss out on.

The Do Good Badlies/ May 10th/ Rancho Relaxo

The Do Good Badlies perform a high energy style of rock that is sure to get anyone moving. They combine the sounds of garage rock with the melodies and folk sounds of indie to create a unique and beautiful sound. The band is based in Toronto and has toured around Canada.

Of course these are just our picks (thanks to Jenn Ko for helping me out with this) for CMW, but there are so many other great artists to pay attention to. If you plan on attending this festival I have to recommend getting a wristband as it will get you into most events. Tell us your favourite acts! Other scheduling and ticket info can be found on the CMW website.