TRENDING
Go to DASHBOARD > Appearance > Menus to set up the menu.
Navigate
2144 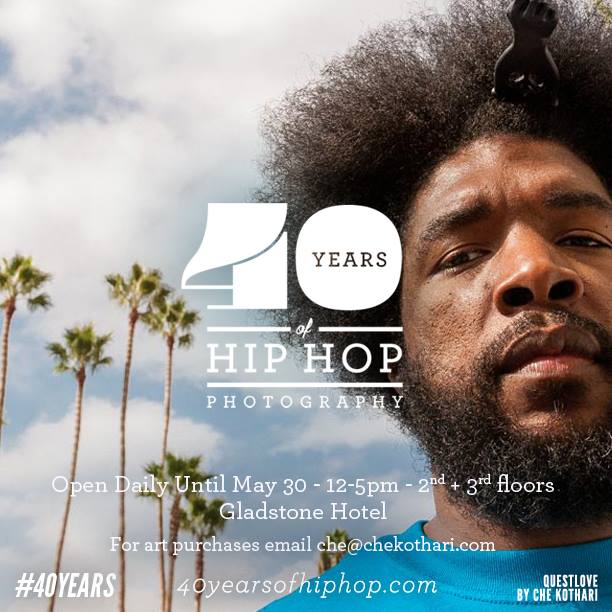 See the impact a genre of music can have on culture through the photography exhibit 40 Years of Hip Hop Photography being held at the Gladstone Hotel in Toronto. Curated by Che Kothari & Ryan Paterson, the exhibition collects works by photographers including Ernie Paniccioli, Jonathan Mannion, Matt Barnes and Janette Beckman, among many others.  Rappers and Hip Hop legends such as Notorious B.I.G, Busy Bee, OutKast, Beastie Boys and Lil Wayne are just a few of the many subjects captured by the photographers. The show runs for the month of May, so there’s only a few days left to check out the brilliant collection.

Read a statement on the exhibition below:

1974. 40 years ago. A movement of epic proportions begins to unfold.

Civil war in Ethiopia has broken out. The crew of Skylab 4 return to Earth after 84 days in orbit. The Rubix Cube is invented. The first issue of People Magazine is released. Happy Days and Jaws are first hitting screens and Muhammad Ali knocks out George Foreman in the most storied boxing match in history. In the South Bronx, New York City – an important story is beginning to be written; one that will forever impact humanity’s cultural identity. Hip Hop is being born.

From its humble beginnings to today, Hip Hop has evolved from a voice for the voiceless to a dominant global youth culture occupying mainstream media and generating billion dollar revenues. A paradoxical juggernaut, Hip Hop is at once co-opted for corporate and personal gain while remaining the primary galvanizer in the fight against oppression and for community building movements around the world. This exhibition explores a sliver of the evolution of this cultural phenomenon through large scale photographic prints from some of the culture’s pioneer documentarians alongside some of its contemporary image-makers. From the youthful and rebellious street cultures that shaped Hip Hop’s essence and style, to artists who’ve reached the highest echelons of commercial success – the exhibit focuses on a North American perspective and fixes its lenses on the most prominent figure from this multi-elemental culture – the emcee. The exhibit does not aim to act as a chronological or definitive recounting of the movement (to do so would require multiple museum shows, books, documentaries, retrospectives and more) – rather it aims to celebrate a collection of iconic portraits that serve as vital contributions to the immortalization of some of the legends of Hip Hop – and the legend of Hip Hop itself.