TRENDING
Go to DASHBOARD > Appearance > Menus to set up the menu.
Navigate
4050

If you couldn’t tell by the constant music references in our articles, we at the Antidote, are in love with music.

In the summer of 2011, our love of music brought us down to Manchester, Tennessee for one of the greatest music festivals in the world. Bonnaroo, a four-day banger with multiple stages featuring your favourite artists across a 700-acre farm, was everything you could ask for in a music festival. If you think 700 acres sounds like a lot, wait until you get there and walk from end to end in the sweltering southern heat. 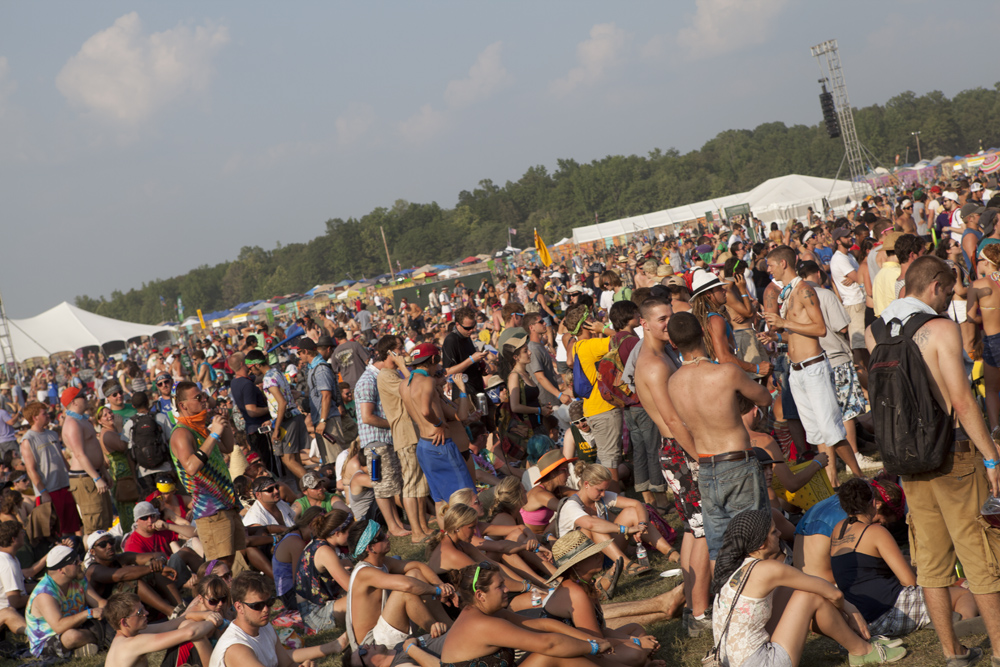 The first Bonnaroo took place in 2002 and unexpectedly was sold out with absolutely no traditional advertising. By the following year, it was recognized by Rollingstone Magazine as one of the top 50 moments in rock and roll and it has continued to grow ever since. At the time of its inception, Bonnaroo was far from being a certainty. The first edition, as it is with many first attempts, did not go as planned.
Excessive rain transformed the farm into a muddy mess and there were numerous issues with the organization of the parking and the campgrounds. After attending Bonnaroo 10 years later, everything has been streamlined and organized to the point that you are amazed at how much they can control considering that 10,000 plus people are in attendance each year.

Musically, what you can expect from Bonnaroo is a mix of multiple styles. You get a little electronica, hip-hop, every indie form, rock and roll and everything else you could devour to satisfy your carnal musical taste. Comedy and theatre is tossed in for good measure with such acts as Louis CK and Donald Glover, a beer festival, cinema, music technology village and what I experienced to be the best atmosphere of any festival we’ve ever been to. 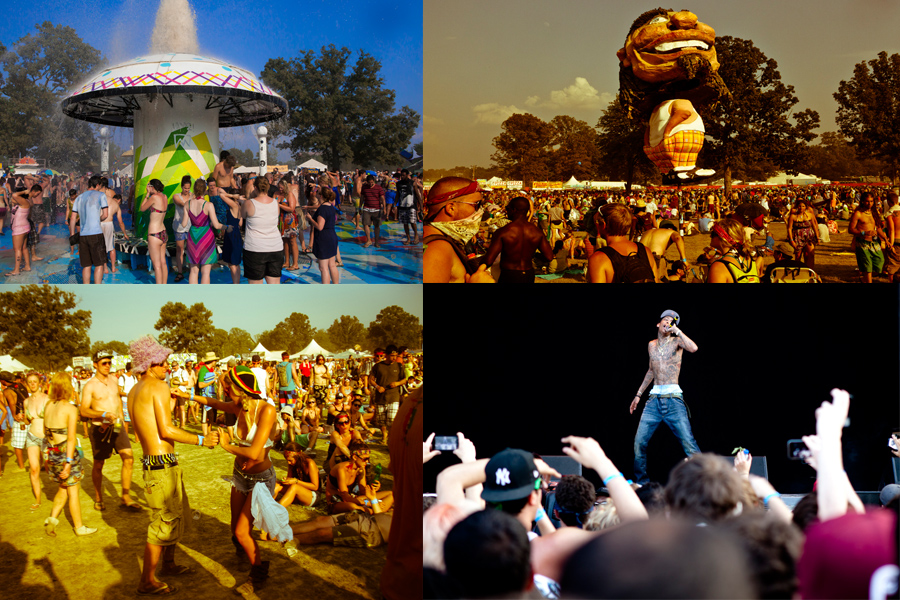 Bonnaroo is the type of festival in which you could get lost, end up on your own and still have the best night you’ve ever had. The cast of characters that grace Centeroo (the main concert area), are unlike any you’ve ever seen. They are diverse, happy, covered in dirt, and always ready to experience the best night of their lives. If you were to judge how crazy the festival goers at Bonnaroo are on a scale of 1 to Woodstock, the only thing you’d be missing is Jimmy Hendrix playing the American national anthem. 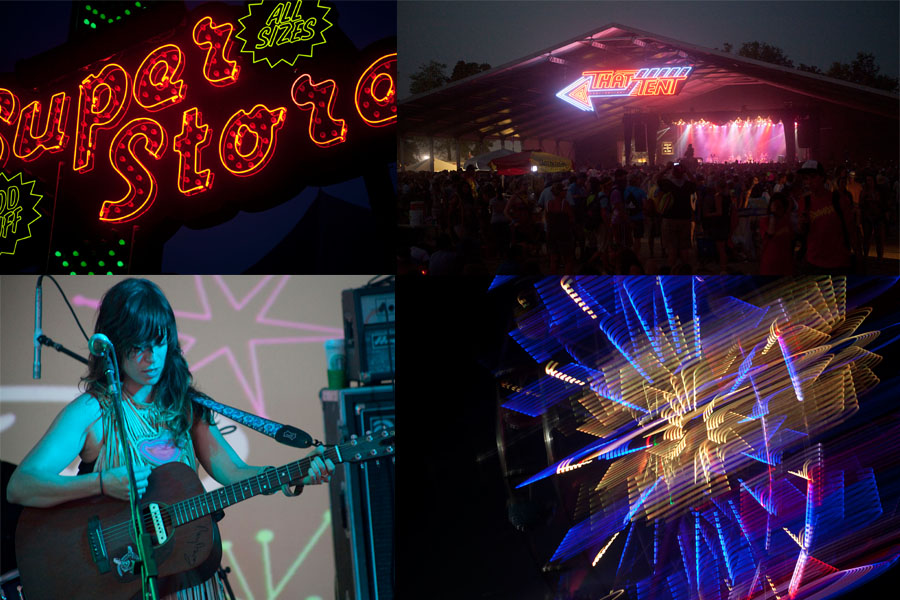 On day 2 of the trip, I got separated from the Antidote crew after watching J Cole light up the stage. Since I knew how futile it would be to try to find everyone, seeing as though I had no cell reception there were 10,000 people and the landmark stages are called ‘Which Stage, ’What Stage’, ‘This Tent’, ‘That Tent’ and ‘The Other tent’, I took off on my own to see what this festival had to offer.

I heard the watchmen play live for the first time and fell in love with their music. I ate cheese fries for the second time and began to realize how much love the American’s should have for Poutine. I also happened to meet a girl named Bonnie who would change the course of my evening but not in the way you think. Not immediately anyway. 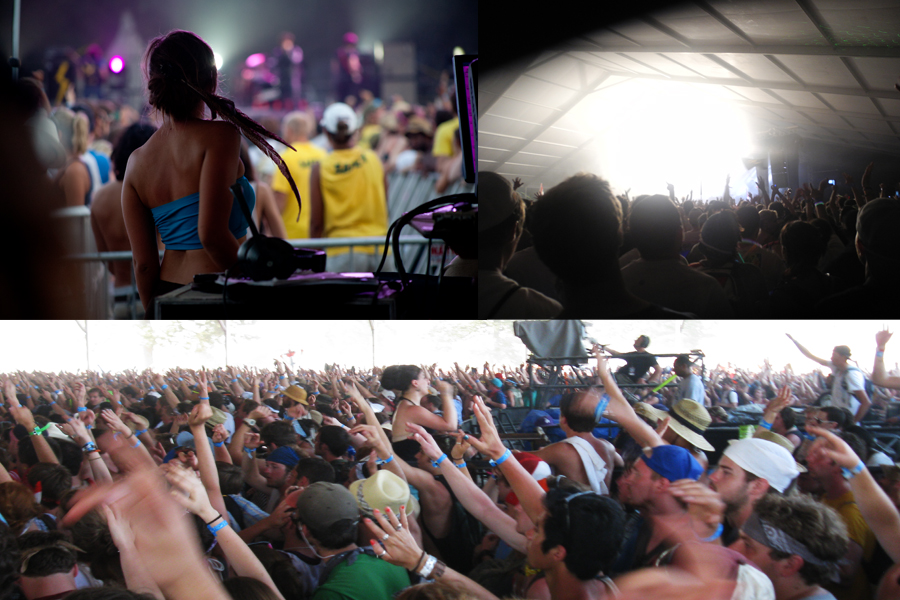 Bonnie was a fire breathing (for-real), hula-hooping fairy-type girl who was clearly hopped up on something amazing called ‘Molly’ and had unfortunately lost her friends. Fortunately for me, I was in the same boat minus the Molly, so I decided to tag along with Bonnie for an adventure that would define my trip. Bonnie and I ran from campground to campground meeting all kinds of people. We drank, we ate, we sang, and blew fire by dumping talcum powder in our mouths and blowing lighters as hard as we could. Bonnie rubbed glow-in-the-dark paint on me and our new found friends wherever we went, and we basically ran around together without a care or worry in the world. I can’t even begin to tell you how many incoherent conversations I had, with people who had most likely abandoned their realities to become as substance-fueled as possible. Bonnie as it turned out was doing her Doctorate in Political Science. How she’ll ever leave the music festival circuit to sit at a desk and discuss policy is beyond me. After a night of ‘philosophical’ discussions that ‘solved the worlds problems’, and a random guy dressed as a chicken storming through one of the party RV’s that we ended up in, Bonnie and I took off into the night. When it was all said and done, I made my way back to the Antidote RV, only to realize that I had sparkles all over my body and looked like a vampire from Twilight after they’re exposed to the sun. It’s as if magic pixie dust had been sprayed on me and I was in Narnia for the night. Only thing is, I didn’t leave Narnia for another 2 days and those sparkles didn’t leave my body until I got back to Canada. As for Bonnie? In true fire breathing fairy fashion, she disappeared and I never saw her again. Maybe I’ll look out for her at the 2019 Democratic National Convention. 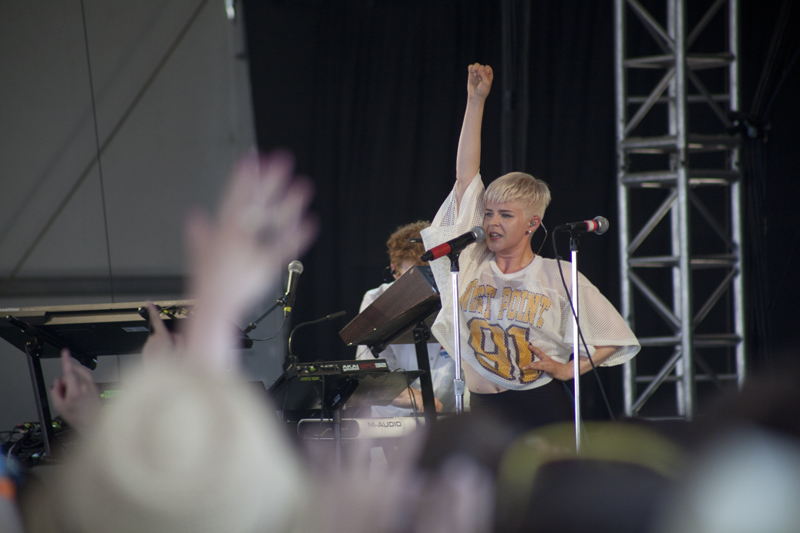 In terms of the artists, everyone performing at Bonnaroo brings out their best. From the major headliners all the way down to the best bands you’ve never heard of, you are destined to hear timeless performances. 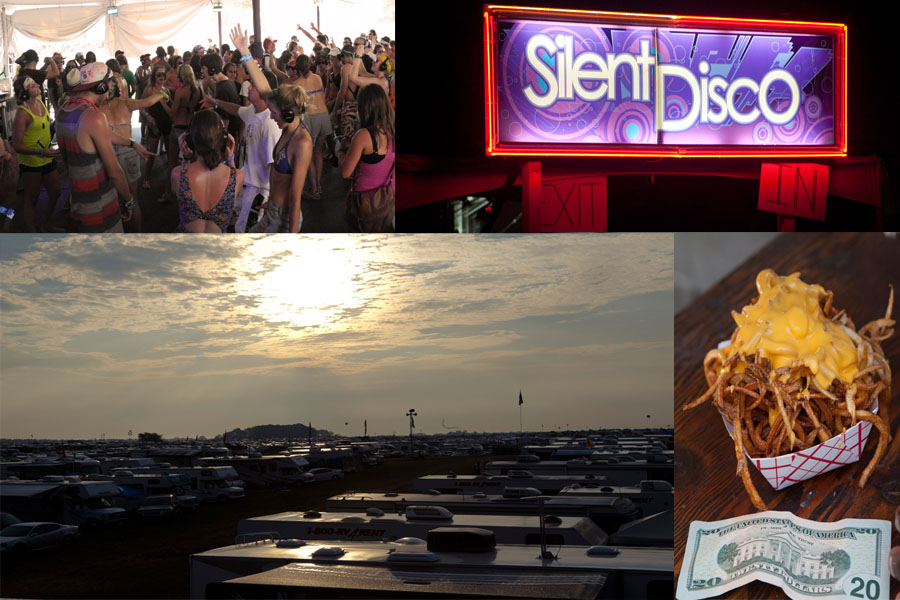 The concert grounds also known as ‘Centeroo’ are designed in a way to provide as much fun and comfort as possible. As much as Bonnaroo is about the music, it’s primary function is to provide an experience you’ll never forget. There are shops selling everything from concert paraphernalia, to hammocks. There are Cool-down areas located in barns, where celebrities pop by to spin a few records. A giant ferris wheel, a giant Mushroom that sprays water to help cool you off, and the legendary silent disco, that from the outside looks like a bunch of anti-social iPod listeners dancing around to the sound of their own beat. It’s only once you throw those headphones on and join the crowd, that you realize the power that silence truly has. 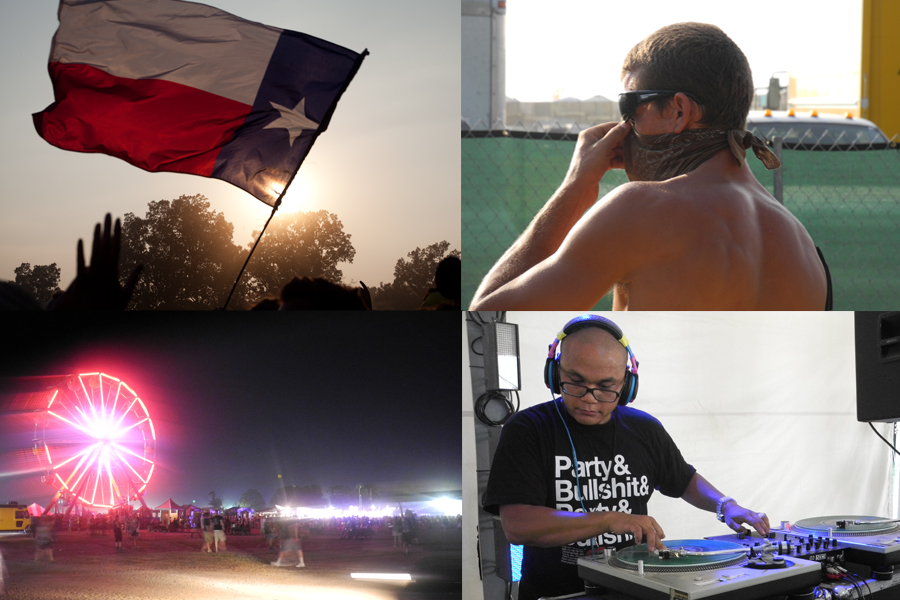 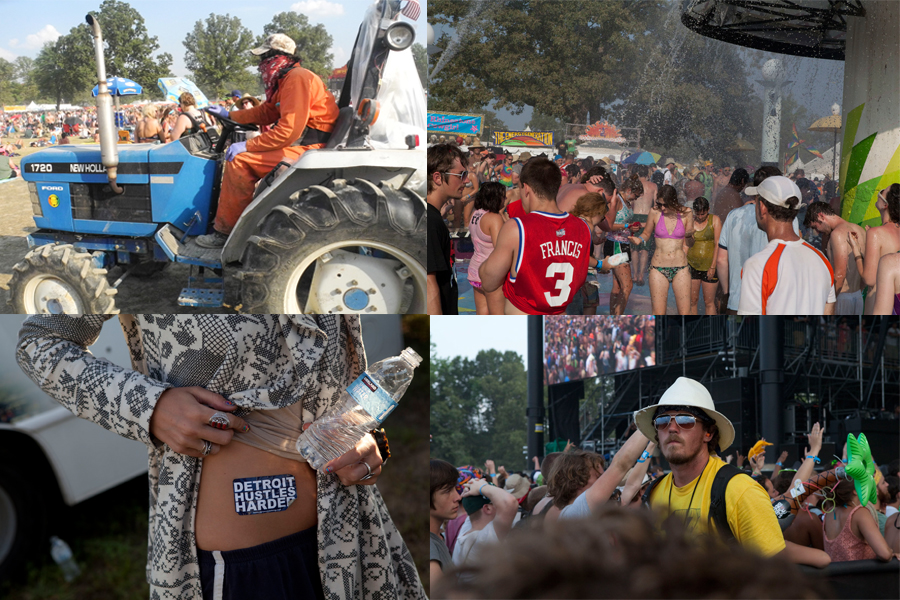 A DJ is plugged into a system that is linked to over one hundred headphones. Once each person grabs a pair, they are tuned in to everything the DJ plays so it feels as though you are in a club with one of the best systems in the world. There are no conversations with the exception of hand signals and body language. The only thing left for you to do is dance. At times I caught myself thinking about how perfect of a scenario this truly is. With the amount of times you fumble your way around trying to get that someone on the dance floor with your words, the Silent Disco illustrated an important truth about humanity. Sometimes the best way to communicate is without saying a word at all. Actions speak much louder.

Music festivals are meant to transport you from your ‘everyday’ into an entirely new realm of existence. You could see any of the acts from Bonnaroo in any other city, without a doubt you’d have a great time. However, seeing a show at Bonnaroo is like watching a band play on Mars. The air feels different, the people around you are the furthest from normal, and half the time it feels like you’re floating around because of the lack of sleep and whatever substance you have just consumed. 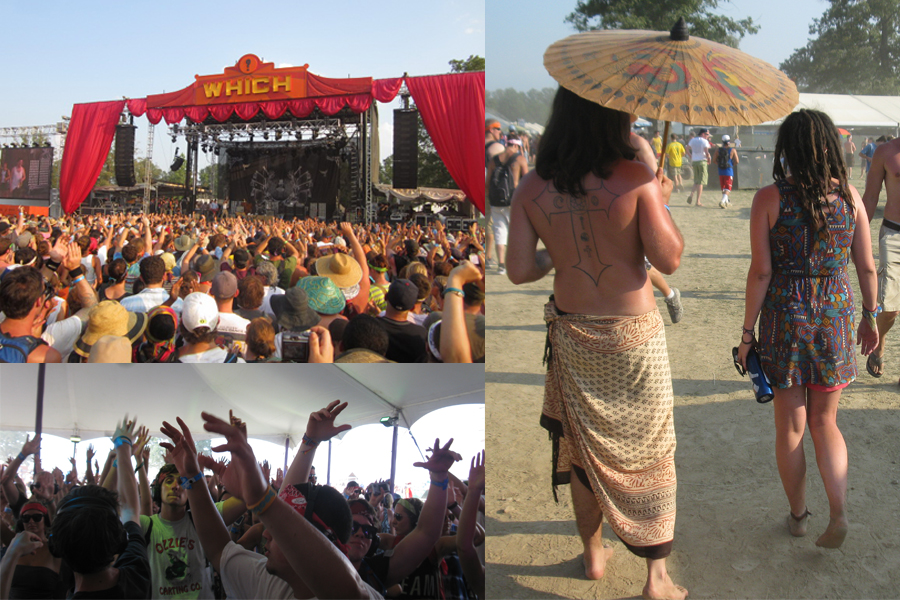 The other most important aspect of Bonnaroo that separates it from most other festivals is that everyone there is a true fan of music. Some inner city festivals you attend are filled with people who are there for ‘something to do’. Some individual concert tickets may have been gifts from boss to employee because ‘they did a great job that quarter’, while other festivals are attended because ‘it’s just the cool place to be. The people are at Bonnaroo because they love the atmosphere that a music festival provides, and they have been waiting the entire year for this weekend. They are there, regardless of who’s performing because they know that the festival is bigger than the sum of its parts. That’s what Bonnaroo is about and that’s exactly why you need to get there one day.