TRENDING
Go to DASHBOARD > Appearance > Menus to set up the menu.
Navigate
3251 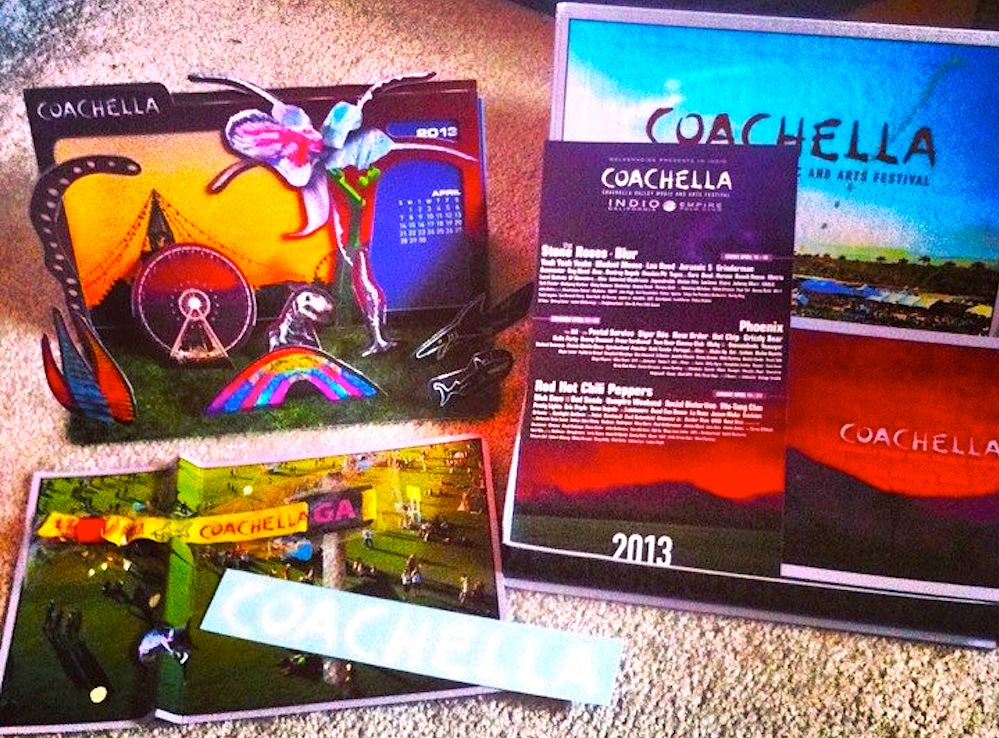 There wasn’t a hologram or a Daft Punk (in-person) showing at Coachella’s first weekend of the 2013 event. However, R. Kelly did make a surprise appearance with Phoenix, and Karen O tried to swallow a microphone; but not even a Sunday sandstorm could ruin the party. Don’t tell me any more spoilers or send me links to the webcast. I won’t listen or watch. Not out of jealousy, I want to keep the slate mostly clean for my chance at weekend two. The few tips I gathered from friends and media at weekend one were for helping me build my schedule, which I surely won’t follow, my wardrobe, which I’ll surely get dirty, and my survival kit, which I’ll surely forget. But hey, it’s Coachella, right?

For a few months, Coachella was nothing but a recurring hole in my bank account – festival passes, cross-country flights, camping supplies. That all changed a few days before weekend one when the set times were posted. At every large festival it is a moment of truth, a blessing and a curse. How many tough decisions need to be made about where to be and when. Friday is especially difficult. I know, Coachella problems.

Going into the set times, I only had a hand full of must-see bands: Modest Mouse and Yeah Yeah Yeahs on Friday and The Postal Service and Sigur Rós on Saturday. I told myself it would all be fine as long as they weren’t playing opposing sets. Modest Mouse and Yeah Yeah Yeahs ending up back to back on the main stage seems easy enough. Similarly simple, The Postal Service wraps up a good two hours before Sigur Rós takes a different stage. All set for easy, breezy fun? Not quite. 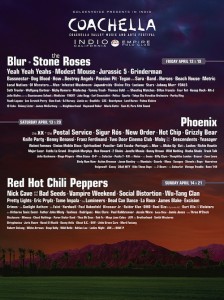 The second tier of acts each day that appeal to a wide range of festival goers, all seem to be playing at once. Do I see Metric or Divine Fits? Let’s say Metric. But then I miss Japandroids. Maybe I can see Alt-J instead and stay there for Palma Violets. Better yet, I can sprint to the Sahara tent in between, dance to Dillon Francis, then go back for Palma Violets! There will be enough time, right? I’ll miss Passion Pit though, but I’ve seen them a bunch of times, that’s OK… I think. Then maybe I’ll catch some of Local Natives on my way to Modest Mouse. Wait, I forgot Of Monsters And Men is after Divine Fits. And oh shit, there’s a sixth stage this year? Ordinarily, I’d be going fetal over decisions this stressful, but I oddly found myself grinning because Coachella. Saturday and Sunday are no different sporting conundrums like The XX, Two Door Cinema Club, Janelle Monae, Franz Ferdinand and Moby then a clash between Vampire Weekend, Pretty Lights, Father John Misty and La Roux. Deep breaths… Coachella.

Now that I was managing to cope with one stressor it was time to tackle a second. How do I dress fashionably, functionally, comfortably and affordably in both the blazing desert heat and cool, dry nights of Indio, California? The excitement of nabbing a festival pass in late winter led me immediately downtown where new spring styles were just hitting storefronts. My mission was to find the signature piece of festival fashion for men and women: a tank top that’s chic but not too flashy. The goal is to be noticed without my clothes begging for attention. Four tank tops later, I realize I forgot the affordable caveat. It was time to get creative and cheap.

The most obvious way to save money is to use what you already own. Jorts, are the signature bottoms at festivals these days, and my budget sure did approve. I did not have a problem procuring several old pairs of jeans from my closet. A few measurements and snips later, ta-da! Jorts! If I can do it, anyone can. I also tried to be thrifty on footwear by dusting off last year’s festival shoes. After a rainy Osheaga Sunday they were pretty shot, so I channeled my inner artist and got some cheap paint and stickers to make a statement. Yes, they glow in the dark. As for those cool nights, I’m lucky I hoard cardigans and have one to match each new tank top. They will more than do the trick – keeping me warm while showing off my new tank top.

It’s all too easy to get caught up in the fun parts of festival fashion and overlook a major necessity, which is even more important in the middle of the desert. The reminder on my iPhone says, “Do not forget your sunglasses.” The sun will be especially bright in the Coachella Valley. So much so that, I should wear a hat too; not only will it help protect my eyes from the sun, but my head and face will approve as well.

Speaking of the sun, it plays a big role in stressor number three. All festival goers, but especially campers, need a survival kit. Everyone’s list should have water, sunscreen and water at the very top. It doesn’t matter when, in Indio it’s always, brutally summer. If I forget about a set while playing dodgeball, who cares? If I forget to drink and apply sunscreen often, I’ll miss a whole lot more. The sand and wind of the desert, as previously mentioned, can and have already wreaked havoc with this year’s festival. The pro tip I heard was in case of a sandstorm bring a bandana to keep the dust out of your nose and mouth. Hand sanitizer, baby wipes, mini deodorant and wisp toothbrushes will also help keep me happy and refreshed.

For campers, some people can rough it away from life’s creature comforts quite effectively, while others are more high maintenance. If you can rough it, skip this part because I am high maintenance. It’s a problem; I’m working on it. Let’s start with the obvious. I need somewhere to sleep. Some dirt and a rock or back seat and a pillow aren’t going to cut it for me. You can bet by the time I leave Los Angeles, I’ll still be plotting a way to fit my bed into a sedan. Sigh, sacrifices for Coachella. I should be so tired from having all of the fun that it doesn’t matter anyway. What does matter is my morning shower; just like the beach I’ll have a fluffy towel and rubber sandals. And yes, I’ll be shampooing, conditioning, cleansing and moisturizing.

Once I’m all washed up and clad in my handsome new and homemade outfits it’s time for fun. Making friends around the campgrounds, exploring the festival art, keeping a most unusual diet, and of course taking in the music is how I plan on making memories of a lifetime at Coachella. Sure the Yeah Yeah Yeahs and The Postal Service highlight my expectations, but the people I’ll meet and the unexpected experiences we will share are why music festivals are more popular than ever. It is wonderfully impossible to make a schedule, keep my clothes clean or remember everything in my kit. It doesn’t matter. I’ll be at Coachella. It will be great.