TRENDING
Go to DASHBOARD > Appearance > Menus to set up the menu.
Navigate
3097 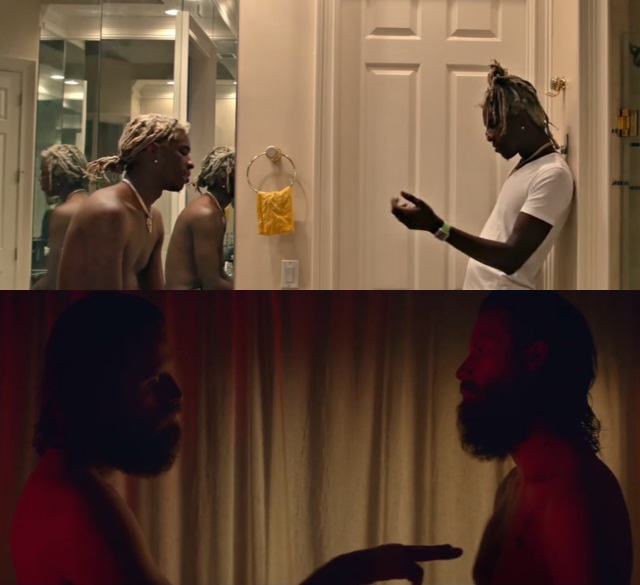 The concept of a doppelganger isn’t anything new in the world of film. We’ve been accustomed to what would play out if there was another exact replica of ourselves. Most of the time, the results aren’t pretty. Take a look at Denis Villeneuve’s recent cinematic mind-melt Enemy for example. In the music world, doppelgangers don’t have as much of a presence. More often than not, alter egos and stage names are a way to distinguish artists. Does it mean that there are multiple MF Dooms since Mr. Metal Face himself has donned the personas of Viktor Vaughn, King Geedorah, and Madvillain over the years? Not exactly. These multiple incarnations of one man don’t follow the conjunctive interpretations of what it would be like to suddenly come face-to-face with yourself.

Last week, we were treated with not one but two music videos detailing the misadventures of celebrated musicians. First was Young Thug on his wonky, self-directed party accompanying his new track “Best Friend”. Second was Father John Misty and his steamy, self-loving session for “The Night Josh Tillman Came To Our Apartment”. In order to properly assess the ridiculousness both videos demonstrate, let us push both videos together in a head-to-head competition.

The two videos draw styles from very different places. To begin with Young Thug, we see the playful Jeffrey Williams navigating through numerous crossfades and low-budget stunts. The single camera approach that tracks Young Thug’s frantic misfires can be seen as a documentary. The camera is simply acting as a reflection of reality. As with all supposed “reality” films, there is no such thing. Young Thug tries to give the illusion of showing as much realism as possible while we all know that Young Thug isn’t actually driving himself to a fancy dinner party hosted by himself and serving a main course of his head. It’s a maddening experimental style that pays off for the equally off-kilter song.

Father John Misty’s video is a much more sophisticated attempt. With its muted colour scheme, perfectly framed shots, and fully-formed narrative, Josh Tillman weaves yet another story of the struggles of love. The only difference is the love happening is between him and his double. It isn’t a complex narrative but it plays to the strengths of Tillman’s acting chops and ability to unwind and be himself.

Young Thug isn’t known for many thought-provoking lyrics. His warbling flow and autotuned delight are what make him a distinct member of the rap scheme. His surprising amount of metaphors and similes make for creative content that allow listeners to think, “Huh, that’s pretty cool”. In “Best Friend”, select stanzas like “I’ma eat that booty just like groceries” and ” I’m gon’ skeet off, lil nigga come catch me, catch me / And that’s my bestie, my bestie, my best friend, go best friend” are easy to interpret as Thugger’s fun atmosphere. The best friend Thugger is referring to is unclear but if the video has anything to do with the lyrical content, Young Thug is his own best friend. He attempts to pass the video off as a distorted shot of realism and in a crazy, messed-up way, it works.

The polished look of Father John Misty’s video is a direct product of the upscale style of indie rock found throughout I Love You, Honeybear. “The Night Josh Tillman Came To Our Apartment” is one of the most hateful songs on the heavenly album, spinning an opening line that goes as follows: ” Oh, I just love the kind of woman who can walk over a man / I mean like a god damn marching band”. The song continues in the despising tone, resenting an unnamed woman in a baritone drawl. The video has nothing to do with the woman Tillman is describing, unless he is trying to say his double is a woman. Either way, the text-to-video application is lacking in that it tells two completely different, cohesive narratives.

Music videos have been a dying art in recent history. They don’t have the same appeal as they did when MTV was at its peak, broadcasting a plethora of artistic examples. Nowadays, music videos appear out of nowhere on YouTube feeds, often without any prior warning. The “wow factor” in music videos has become increasingly difficult to pull off. Young Thug manages to pull out all the stops with his manic demeanour in the “Best Friend” video. From the absurd caught-in-the-act scene with Thugger on top of Thugger to his whiteface-donning dinner party host character, Young Thug fills his 3-minute long video with endless hilarity and ridiculous situations.

Father John Misty takes a similar approach with scenes of two Josh Tillman’s swimming in a pool, snorting cocaine, flirting with each other, and waking up beside each other in bed after a long night. It’s only appropriate to associate a “wow factor” to this video as well, yet its movement is much more muted. Upon viewing the video once, there is nothing that immediately jumps out at you. Other than the fact that there are two Tillmans, Young Thug gives viewers a more enjoyable viewing experience.