TRENDING
Go to DASHBOARD > Appearance > Menus to set up the menu.
Navigate
2688 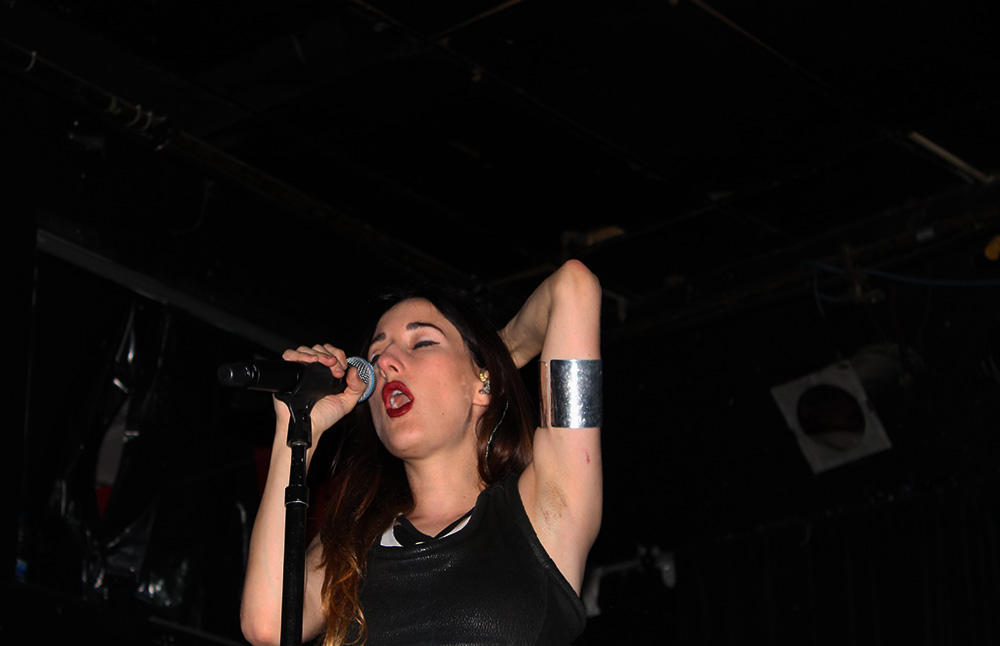 The fog descended slowly, the coloured lights piercing through it, shining Will Wiesenfeld’s face with their glow as he thrashed around the stage in a way you might not necessarily expect him to. The thing about music festivals, especially one that mostly takes place at various venues in downtown Toronto, is that sets are universally short and one of many in the area. Most of the artists I saw over four days seemed to take this to heart, bringing an admirable amount of energy, as if to thank those who have come for choosing this show over the many other shows occurring at the same time (which Wiesenfeld, also known as Baths, acknowledged onstage), and to get the most out of their respective under-an-hour set.

I spent four days covering NXNE, and though it was exhausting, it was also exhilarating to have so much condensed into a short period of time. Toronto is a city of multitudes, particularly in comparison to my native Ottawa, which is a city of dualities. English and French, Liberal and Conservative. You can’t narrow anyone or anything down in Toronto, which seems like the perfect opportunity for an artist to utterly surprise you. Zola Jesus surprised me on my first night. It almost seemed like a punk show, as she climbed on top of equipment and threw her body in violent contortions during breakdowns in the music. But her voice was crisp and clear, soaring through the small and grimy venue (Lee’s Palace on Bloor). It was obviously meant to be the main focus, as the only light that seemed to hit her came from camera flashes. The stage was dark, almost frustratingly so, forcing us to watch her without being able to properly see her expressions.

She wore a white and flowy garment with a hood, but quickly discarded it, leaving a sportswear top and a long, black skirt. Going on at midnight means you expect a certain kind of crowd, but this one was not feeling it, which made it hard to feel too upset when she walked off the stage after little more than 30 minutes, her arm extended upwards as she walked as if to say, “I’m done, assholes.” It’s a shame, because her music is well-suited for the dark and sticky environment of Lee’s Palace, the kind of sick-pop that Charli XCX is further popularizing right now. “Dangerous Days,” off her latest album Taiga, got some of the crowd moving with its poppier hook as she paced purposefully from one side of the stage to the other, over and over.  “Night” was the obvious highlight, the booming synths and her growling, powerful voice begging you to “come close, close to me”. Because at the end of the night, she was gone just like that. 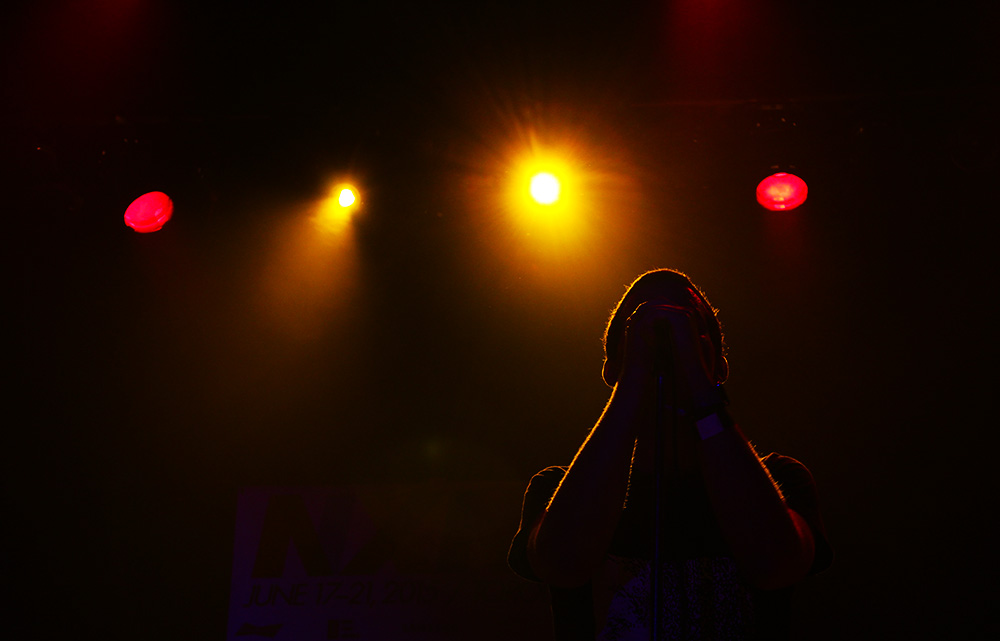 The next day, I was to meet up with Wiesenfeld for an interview (look for that in the near future) in the afternoon. The conversation was an interesting precursor to his performance later that night, as he was very silly, funny and light in person but so relentlessly intense onstage. I’ll talk much more about that in the interview, but it offers a glimpse at the many sides of Wiesenfeld and the demands on an artist performing old material that they don’t necessarily identify with anymore.

Lydia Ainsworth opened that show, at The Phoenix Theatre on Sherbourne, an unassuming venue from the outside but an impressive space inside. The building seems incredibly old, with certain things no longer working or forgotten, certainly a counterpoint to the eclectic synths and modernity of Ainsworth, Baths and middle act Hundred Waters, who are touring with Skrillex right now. It’s a venue on its last legs, and it felt pleasantly ironic to be seeing some of the most forward-thinking acts perform there. Ainsworth’s set was relatively low-key, as she went through her best songs, such as “Moonstone” and “PSI”. 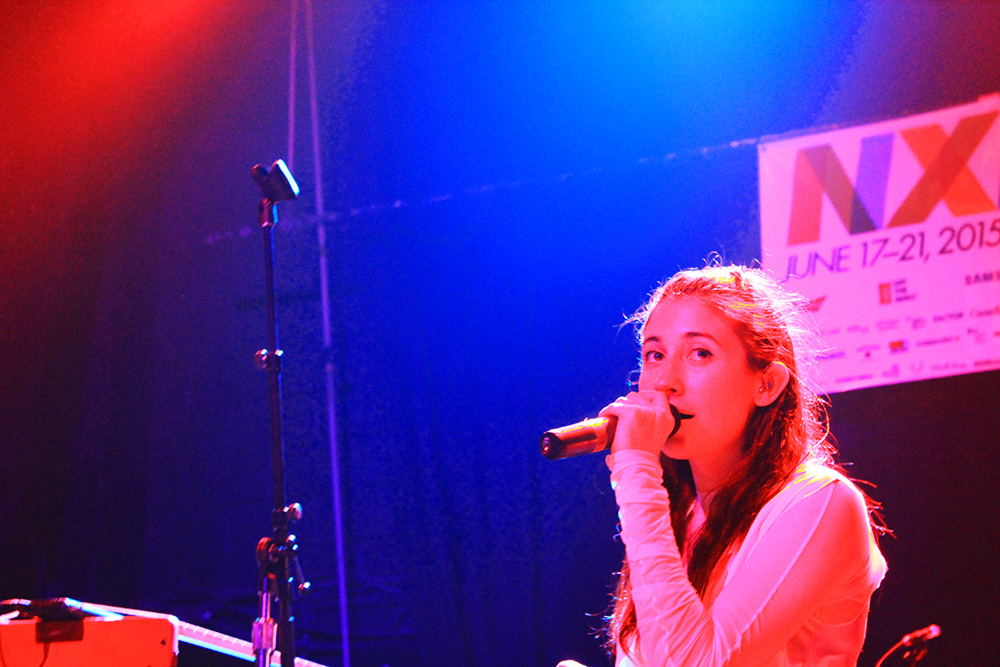 Unlike almost every other act I saw, her energy was low, but then Hundred Waters took the stage, bringing plenty of their own and proving themselves to be one of the festival’s standout acts. Led by singer Nicole Miglis, dressed in a beautifully designed white dress, it was a short set that flitted between light and dark. The band brought out a cake for drummer Zach Tetreault for his birthday, thanking the crowd for indulging them before jumping back in with “Cavity”, a song with lyrics that reference sirens moving to the sound of writhing worms. By this point, I was feeling that Long Island Iced Tea I had bought, and the slight wooziness gave their hazy love/hate songs added poignancy. The colours of the lights streamed in through my camera lens, Miglis looked me in the eyes, I rocked back and forth with my arm around my friend and I felt oddly euphoric. 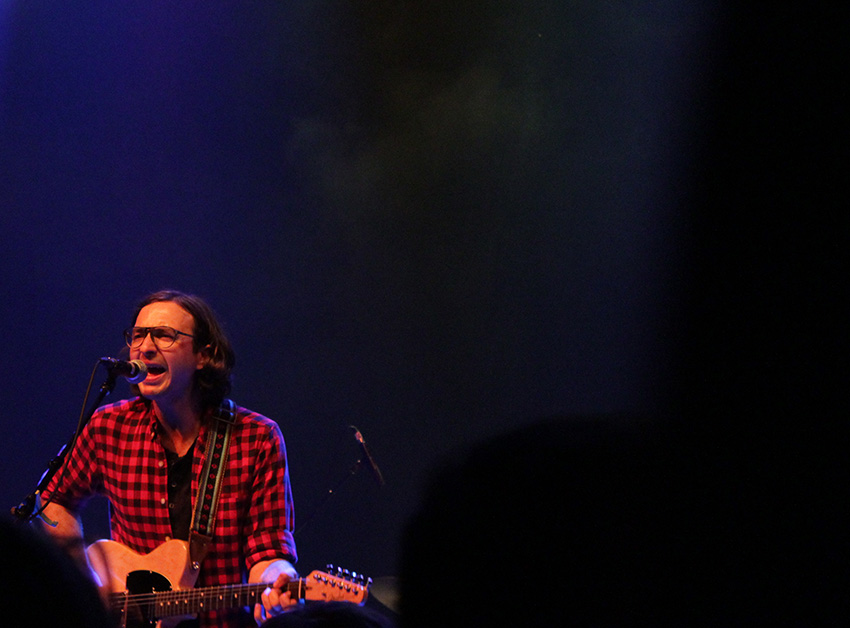 The next night at Danforth Music Hall was Amen Dunes and Real Estate, a combination that worked almost too well considering how Amen Dunes essentially do what Real Estate does except worse. Danforth more or less resembles a cross between an opera hall and a warehouse, with lots of grey and a very high ceiling, giving an appropriate atmosphere that mixed the grand space with the intimate, rambling music. My friend and I sat at the back for Dunes’ set, leaning against a barrier and taking it all in, my eyes often closed as their guitars gently jammed. By the time Real Estate came on, it was too late to get particularly close, but we didn’t mind. Flannel-wearing Wes Anderson-lookalike singer Martin Courtney’s soothing voice left me in a distinct state of peace, sending me to a place where I knew everything was going to be alright. They played much of their excellent latest album, Atlas, and stressed that they wanted to play more but that city laws for the area prevented them from continuing past 11. It seems strange to say, but I was ready for sleep anyway, and I mean that as a compliment.

My last show of the festival was far different. I showed up late to Adelaide Hall, partly because the alleyway entrance is not particularly easy to find, and was able to catch Cold Cave’s full set in the cramped and sweaty club. I knew the name but had never listened before, and their performance has caused me to download their discography. They seem custom-made for my taste: goth-tinged, synth-heavy darkwave pop reminiscent of Depeche Mode and The Cure by way of Nine Inch Nails circa 1994. Wesley Eisold, the one-man force behind Cold Cave, was a deliciously melodramatic performer, making grand gestures and screaming into the faces of those in the front row. I’m working on co-directing a stage production of The Crucible right now featuring music by artists like Crystal Castles and SALEM for some dark scenes of witch rituals (it makes sense), and I immediately thought about how perfectly Cold Cave’s music would fit. 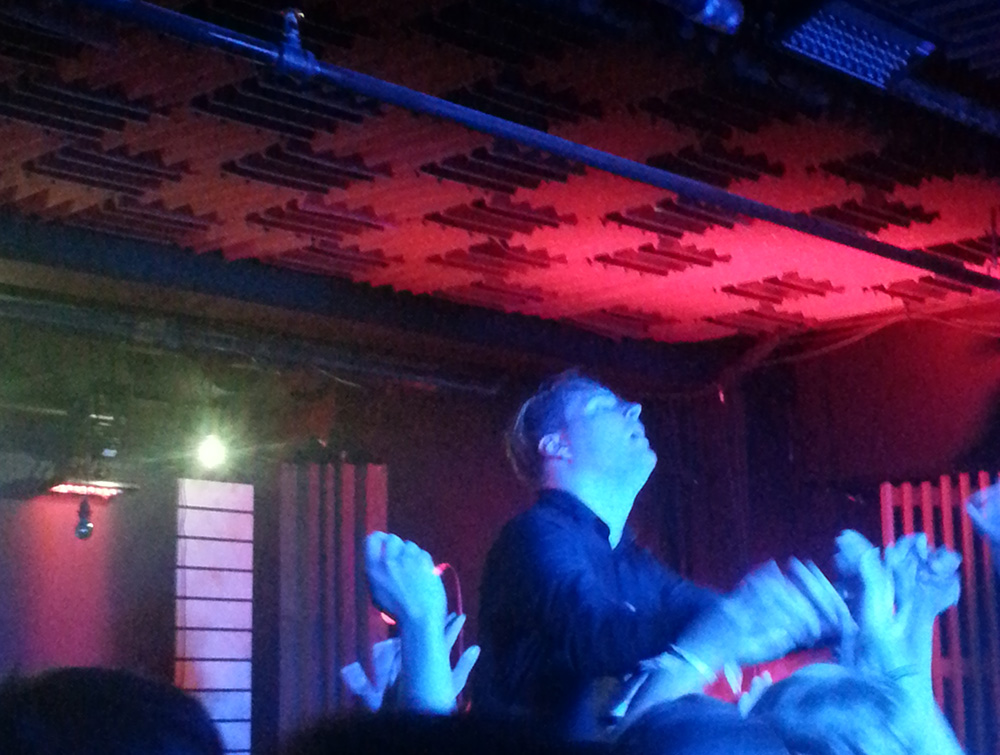 Following them was Deafheaven, and this was quite the act to end my festival with. Frontman George Clarke is known for his onstage persona, and it is truly jarring to watch him conduct friendly chit-chat with the audience before the show, dressed handsomely and looking rather attractive, and then watch him stick his fingers down his throat to force himself to throw up in the middle of the set. He appeared to become increasingly unhinged as the show wore on, always conducting the audience as if to control the chaos beneath him and always beckoning his obsessive followers to touch his hand and follow his every move. It was fascinating to watch as someone who goes to metal shows to be adjacent to them, meaning I stood on the side of the pit, narrowly avoiding the moshing and constant stage diving. I saw How to Dress Well’s Tom Krell in the crowd, until joining Clarke onstage and stage diving himself, then disappearing backstage. I saw one stage diver walk on the low ceiling about ten times, each time crashing down on top of several people and almost definitely drawing blood. I saw one mosher whip around and smack his head hard off a low-hanging speaker, then return to the middle of the pit as if nothing had happened. It was hot, claustrophobic, gross and filled me with anxiety that someone would be knocked out by a falling stage diver or crushed beneath the feet of the moshers. But it was unlike any other concert-going experience I’ve ever had, and NXNE offers that kind of thing every night.