TRENDING
Go to DASHBOARD > Appearance > Menus to set up the menu.
Navigate
2501 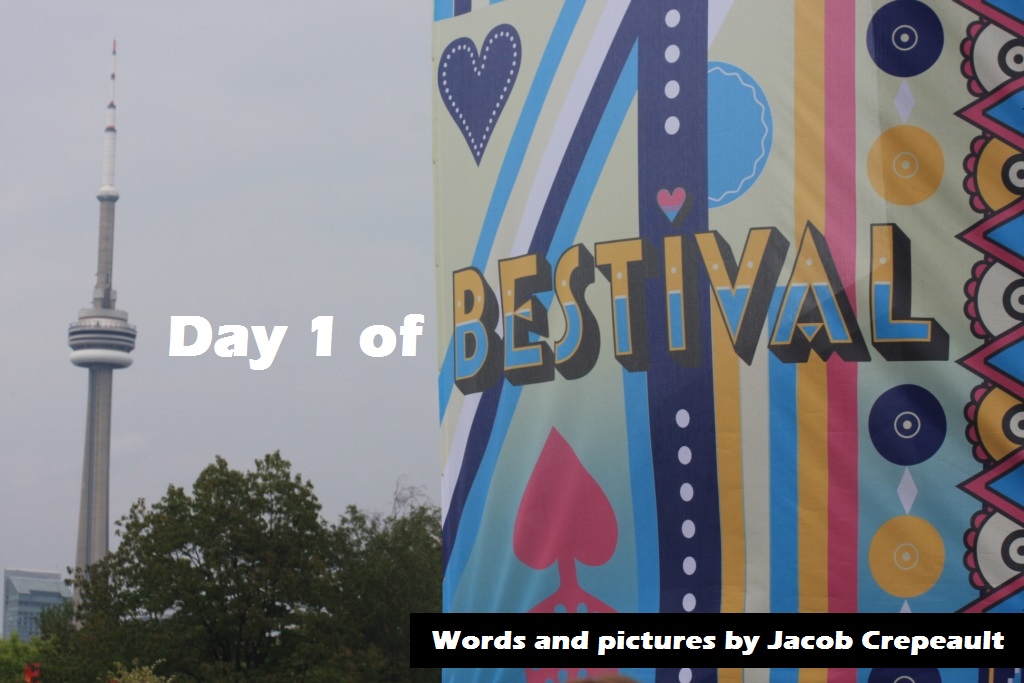 Bestival was originally a music festival put on in the UK. As with any stereotype given to a certain location, rain is a common element associated with the Brits. As Bestival arrived on Toronto Island, the weather wasn’t unlike a typical day in London. Huge grey clouds overtook the sky and haunted the first day of the fest. For the most part, the festival was prepared. Rain ponchos were given out in droves. People didn’t seem to let a little water dampen their moods though. Festival-goers, the majority being university-aged, danced, sang along, and ate their way into a state of pure joy.

When I first arrived at the ferry harbour that was meant to take all of the press representatives to the island, all forms of people surrounded me. I quickly realized that this ferry wasn’t meant solely for the media. Musicians performing that day also boarded the luxury cruise with their gear in-hand. I had the pleasure of sharing a table with Jamie xx and his production crew during the ride over. Jamie looked rather uninterested in what was around him. Several people came up to greet him but he barely changed facial expressions and made very little conversation. He came across as a slightly shy British man, unaware of how popular he has truly become. After checking in to the media tent, I set out to explore the grounds. Though the rain ruined a few of the things meant for outdoor relaxation (like Fido’s #GetCurious lounge), other festivities were packed with participants. An inflatable church was put in place to perform mock wedding ceremonies for those who were willing. I walked by as one wedding was ending. It was quite the production as costumed members of the clergy filtered through the doors in a heavenly fashion. 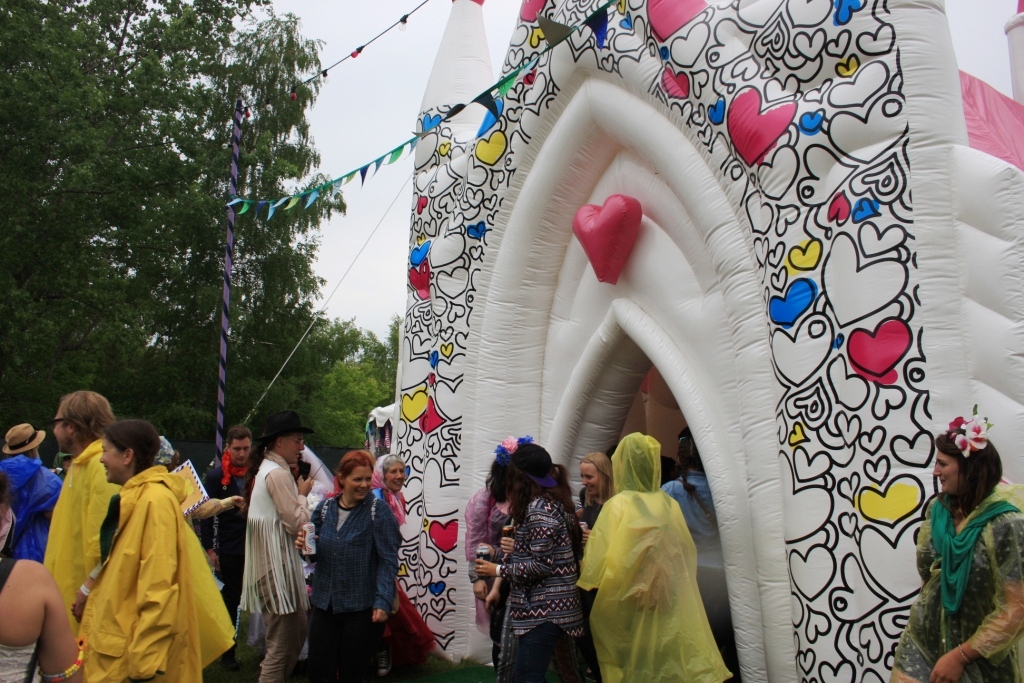 The Big Top stage presented by Bacardi, intended for aspiring DJs to show their stuff, became more of a rain shelter as the day progressed. Several people ducked under the enormous tent simply to sit in a corner and wait until the rain stopped. The first DJ on the Big Top stage was Pusher. He kept his relatively small crowd moving with head-bobbing beats that were not unlike a typical club playlist.

I braved the rain to check out the Main Stage performers. Sadly for those performing, the crowds were tiny. For some reason, the Main Stage was barren for the majority of the day. Museum of Love, lead by ex-LCD Soundsystem member Pat Mahoney, put on an entertaining show with instrumentals that sounded like a re-emergence of James Murphy’s legacy. While their show was not overly theatrical, their straight-forward set was a pleasant way to begin a festival.

The Bollywood Stage, one of the coolest stages I’ve ever witnessed, began to get packed with feverish anticipation for Jamie xx’s DJ set. Rob Da Bank, the festival’s host, was closing his mind-numbing dance mix, moving the crowd with rhythm and soul. As Jamie xx made his shuffled entrance, the crowd erupted into applause. Jamie remained unfazed as he casually set up his turntables, placing a record on the board. To begin his show, he cut the power from Da Bank’s music, insisting that it was his turn to entertain the masses. He flipped on the record player as The Persuasion’s “Good Times” flowed through the air. As the song came to a close, Jamie burst into “I Know There’s Gonna Be (Good Times)” to the crowd’s delight. Throughout his show, he continued to bring forth traditional R&B and soul records and turn them into something of his own. He also played hits from his instant-classic album In Colour, such as “Girl” and “Gosh”. 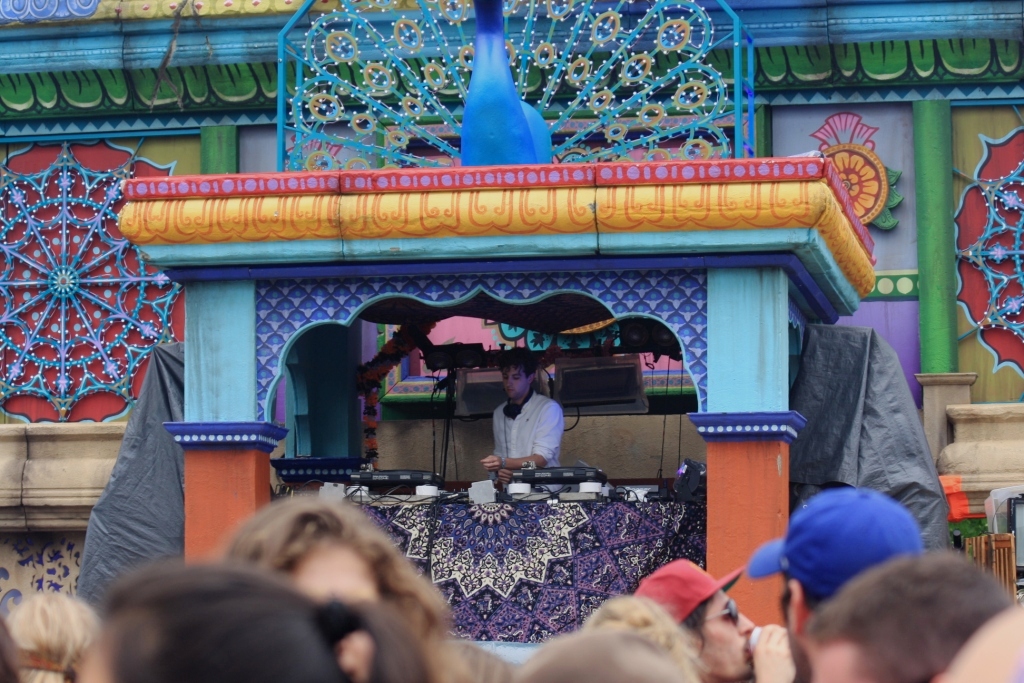 The surprise performance of day one came from the significantly short performance from Alessia Cara. Her 15-minute set didn’t stop her from bringing a tremendous stage presence and slick pop production. Despite a few sound issues during the first song, her concert was one of the more memorable. By this point in the day, the Main Stage had become a mud pit, leaving no shoe clean. Wavves came out on the Main Stage a bit later with a completely different approach. Their head-spinning speed rock was full of restless energy that never let up throughout the performance. One song bled into the next as the band seemed rather unengaged with their gathering of fans. They came off as bratty, sarcastically making comments like “This is the best Burning Man we’ve ever played” and “C’mon, let’s finish this up, I want to get out of here”. Nonetheless, it was a fascinating show to behold.

As the night was nearing its final hours, I decided to sneak into the Big Top once more to catch a glimpse of SBTRKT‘s DJ set. My luck was against me as I attempted to shuffle through an airtight crowd, swaying in hypnotic fashion to the woozy, late-night jams. I quickly realized that I would have no chance of finding a remotely quiet section in the distraught crowd so I escaped while there was still time. Figuring that the Main Stage was the best place to stay, I engaged myself with the final sets. Clean Bandit was first, performing an elaborate set to adoring fans. Their pop style was eaten up by the crowd who bounced in unison to each new track. I could tell that it was almost time for the headliner as more and more people made their way into the muddy mess. Florence + The Machine closed the evening with a brilliant set, performing songs that were new and old (such as “Rabbit Heart (Raise It Up)” and “Shake It Out”). Their new material from How Big How Blue How Beautiful translated gorgeously to the big stage as Florence Welsh rang out in her signature vocal style during highlights like “Ship To Wreck”. The band also performed a moving cover of the Florence-featured track “Sweet Nothing” and turned it from a club banger into an elegant pop piece. Overall, Florence + The Machine kept the crowd alive with their stadium-worthy sound, capping off the first day.