TRENDING
Go to DASHBOARD > Appearance > Menus to set up the menu.
Navigate
4093 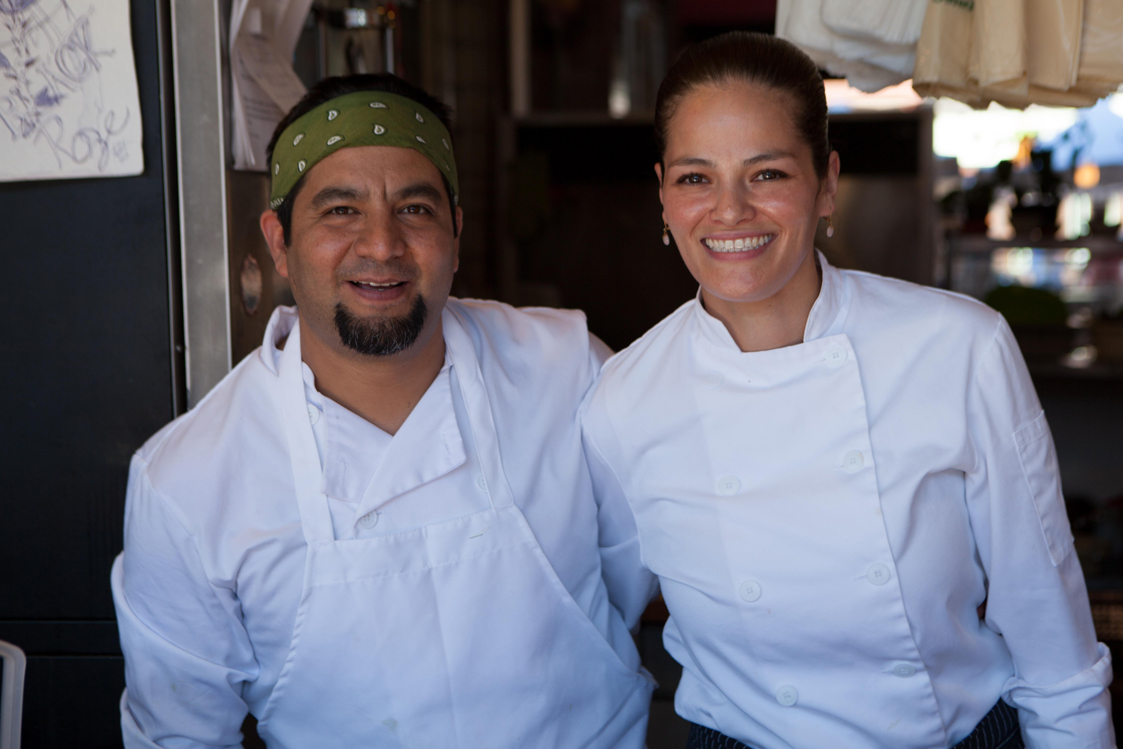 With a limited amount of time for my lunch break from work, coupled with a desire to get out in the sun, I found myself wandering the heart of the Byward Market looking for something to eat. Tired of my usual ‘go-to’ spots, I braved the hordes of tourists and groups of schoolchildren wearing matching, fluorescent t-shirts and entered the covered portion of the Byward Market. Always ready to try new Mexican food, I figured I’d give Corazón De Maíz a try – a new Mexican place that had popped up in tourist central.  While the menu is fairly limited to your usual ‘to-go’ fare (ex. burritos, nachos, tacos, etc.) there is some seating space and the atmosphere is always friendly. I ordered a pulled pork burrito and didn’t realize my life was about to change. I know I have a flair for drama – but I feel like I had some sort of romantic moment with the food that day. It spoke to me, it seduced me…I don’t care how weird it sounds, mom, we’re in love! To my chagrin, word got out and my tiny oasis is now packed with hurried government workers looking to pick up lunch and grab a seat. I figured there must be a great story behind such a tiny spot that’s always so packed, so I set up an interview with owners Mariana Torio Sosa and Erick Igari Vergas, and headed over with an empty and eager belly. 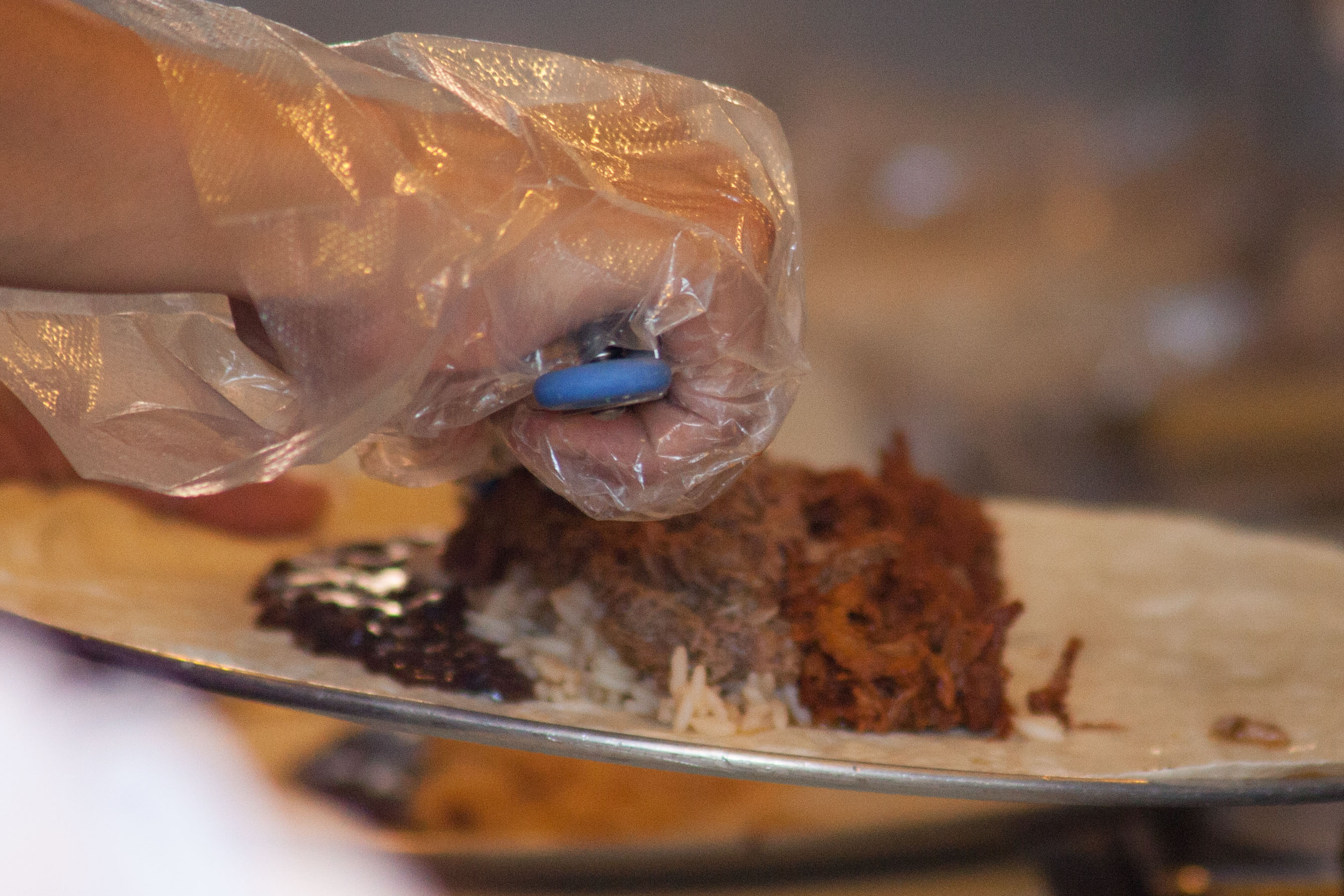 Corazón De Maíz will be open as of two years this November 2013. Owners Mariana and Erick always enjoyed cooking and in the end, it’s what brought them together as a couple. During my visit, while Erick worked in the background, Mariana told us about her home and her cooking studies at Centro de Estudios Superiores de San Ángel (CESSA), Mexico City. After Mariana had finished school, she worked next to the restaurant Erick owned, and who would have thought that ten years later they would be together and have a restaurant in Ottawa. It did take some time, as Erick was Mariana’s boss and had a girlfriend in Canada he was visiting as often as possible. When that ended, their romance began and continued for several years despite the distance as Erick was living in Ottawa. On a trip home to visit family, he asked Mariana to marry him and five days later they were. The next step was just as difficult as they both left their families and moved to Ottawa together. Working double jobs and missing family and Mexico, the joint dream to open a restaurant didn’t seem possible until Erick, who was working at Le Moulin, noticed a spot had opened up a few spaces down. It was now or never. True to their testament of hard work, the space was theirs as of October 14th and they had opened by November 30th. Erick had hand-painted, built, and in some cases hung the larger pieces of furniture; they were now the owners and managers of a six person staff and their first co-owned restaurant. The first six months were very worrying as they were still working other jobs to cover rent and completed long, full days at the restaurant, alternating shifts. Because December was their first month, they couldn’t rely much on tourist traffic and depended on the word of mouth from locals, which was their only form or marketing. Word of mouth spread as the delicious food spoke for itself and brought in new customers who were eager to return. It is for this reason that locals will still brave the tourists to eat here during the summer months. 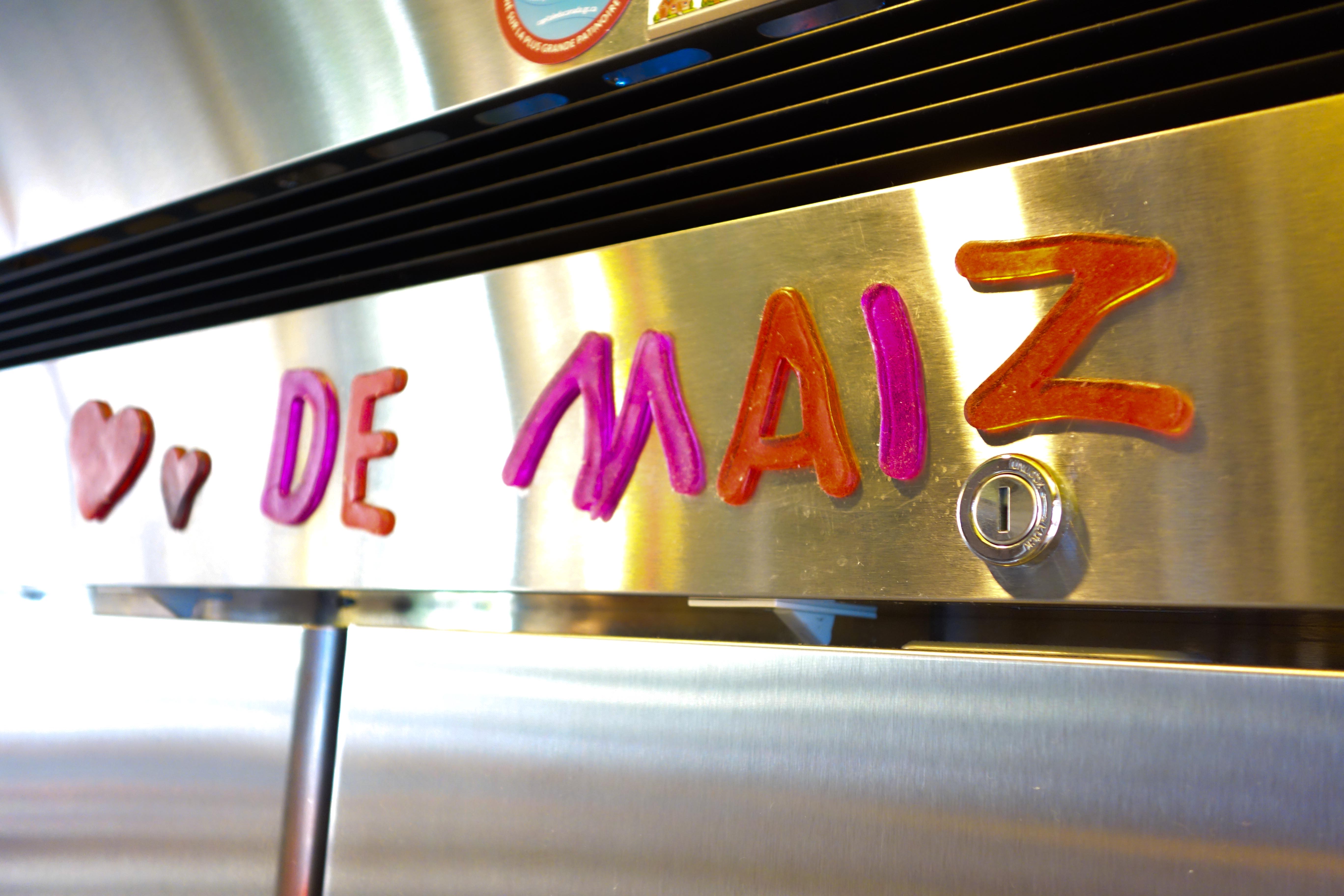 Settling down with my laptop at the counter, my friend and I observed the busy kitchen staff at work and took in our surroundings. There is no doubting that the restaurant is very busy but no matter how chaotic, their staff is still friendly despite the hurried atmosphere and the heat. A staff of about four to five manages the small kitchen that operates as a cooperative team in assembly-line style service. I watched as each staff member greeted the next customer with a smile and spent the necessary time to lovingly assemble each dish with efficiency but without making the customer feel rushed or anxious. The hot sauce station is self-serve and set across from the food preparation area, placed on one of Erick’s home-painted shelves. All the sauces are homemade and prepared every two days with fresh ingredients and available for sale if you request a few days in advance. Big pots and pans and oversized utensils hang on the exposed brick wall and around the counter, creating an inviting home kitchen design that makes things feel friendly; an open air service like being at a friend’s house for dinner. Casting my eyes upwards, I spot books, figurines, and a variety of Mexican products for sale while a collection of large fridges surround the space and are stacked with fresh food, big Tupperware containers for rice and beans. I found myself constantly noticing new things as I sat around feeling comfortable despite the small space and the noise from the market streets.

True to their commitment to serving options for those with food sensitivities (vegetarian and especially dairy or gluten allergies) there was much food for both myself (dairy-free) and my dining accomplice (dairy-happy) to sample. Mariana explained that they always have fresh vegetables as they come in from the Byward Food Market directly across the road, ensuring freshness while supporting local Byward businesses. All the meat is brought in from Alberta, and Canadian sourced. We started with two half-portions of their popular Tortilla Soup, one portion with some cream and Añejo cheese, and one without. Mariana explained that the traditional Añejo cheese is similar to feta cheese in its consistency and saltiness. Both were scrumptious and my friend described his portion as his “new favourite thing.” I’d read several foodie snippets calling for Tortilla soup as the new trending dish and I would have to join the enthusiastic crowds. Not overbearing, not bottled-tasting, but rather a few ingredients that work together, each contributing and holding their own flavour with nothing to hide. It’s no wonder that this hot soup is always popular despite the summer heat. The spiced tomato broth is topped with fresh slices of avocado, long tortilla strips, and in the case of my friend, hints of cheese to taste. 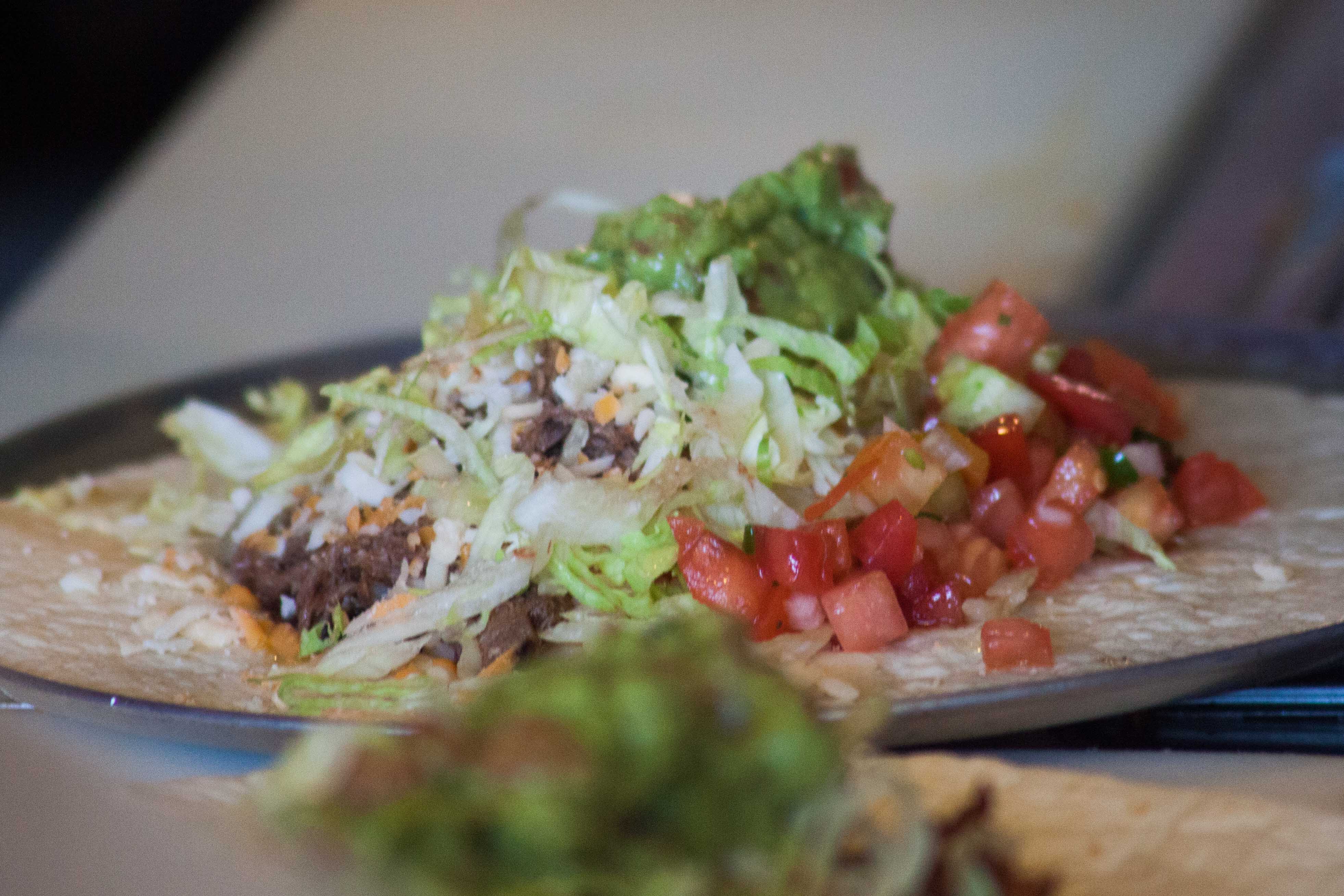 Next on the tasting menu were Quesadillas, which my dairy-inclined friend described as a, “cheese lover’s dream.” One filled with pork and one with beef, the cheese melts through both meats, making for a very juicy but not heavy taste. The soft corn tortilla is fresh, traditional, and good for gluten sensitivities. There were no greasy drips coming off the quesadillas and the plate wasn’t left with the wet, shiny surface you often see with lower-caliber ingredients. The option to choose your own spice level according to the chart on the spice counter guarantees individual satisfaction.

Up next were the Tostadas, a hard, flat corn base and warm black bean layer with a cheese option. Piled high with vegetables and your choice of meat, they are more authentic, and while less popular at first they are growing in popularity as the regulars expand their options and chance to try them. Eating the tostadas might deter some people, who are insecure with the messy way you hold the corn base flat and bite into the breakable bottom, but I implore you to try them if you can snag a table (probably not very practical as a ‘to-go’ option). I opted for one chicken and one beef, which I adorned with Mariana’s homemade garlic jalapeno sauce – her grandmother’s recipe. Mariana explained that the beef is prepared overnight in the oven and stays there until the following morning, for a total of twelve hours. It was very succulent and spiced well, although its soft melt-in-your-mouth flavour made me miss the pork. I mean it’s not the beef’s fault, but the pork was my first love and it’s always hard to move on from your first time. I still lay in bed sometimes wondering if this pork might be the one. The chicken was also good and a little less runny, making it perfect for those who are trying the tostadas for the first time and don’t want to get as messy as possible. All in all, the tostadas were a messy, savoury, pile of fresh and filling food. 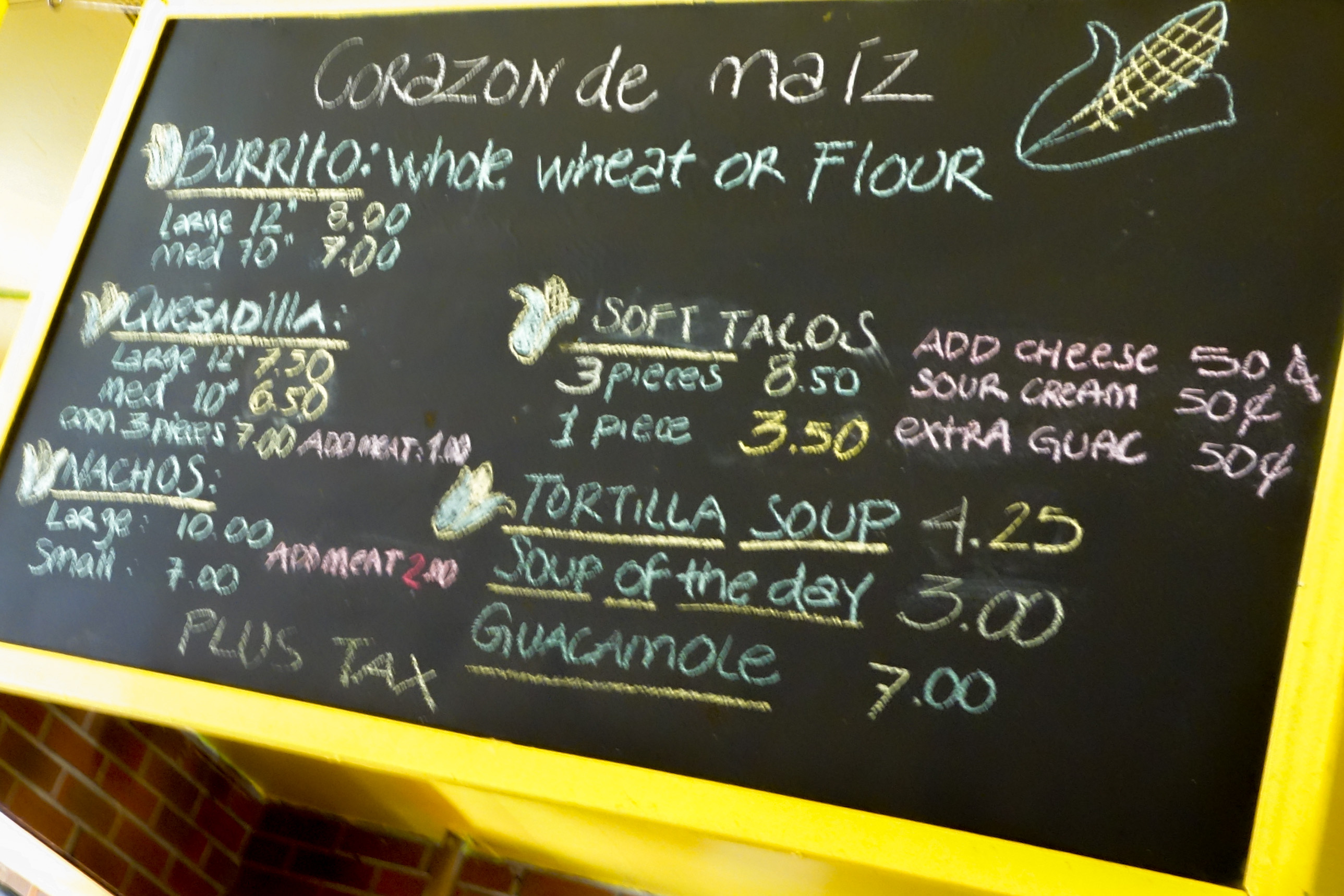 Last on the tasting menu was a small, soft-corn taco which can be ordered individually or in a group of three as a meal. I requested the pulled pork because while all their meat options are wonderful, the pork is outstanding. Another wonderful feature of the taco meal, in addition to their traditional preparation and serving method, is that guacamole is a given – not an extra. None of this extra dollar for a lump of cold, blended avocado mess, the guacamole at Corazón is fresh, spicy, and served in heaps at no extra charge (unless you need even more than already provided).  I needed the story on this pulled pork and Mariana explained that it is marinated and prepared in the tradition of the Mayan Riviera, Erick’s home. Called, “cochinita pibil” it marinates with a traditional set of spices for three days before it is shred the day before it is served. Baby, you’re the one.

Wiping away the last tasty morsel from my mouth (and chin), I felt the slow burn of the jalapeno sauce bite at my lips and took in my surroundings one last time. I asked Mariana if they are thinking of expanding. They are at the point of having a conversation about it, smiled Mariana. There is not enough seating at this spot and they are not able to get a liquor license, so they are looking to maintain this spot but also find a second location. There is a quote written in chalk at the back of the kitchen, which I asked Mariana to translate since my Spanish is pitiful at best. It is Erick’s favorite poem from Amado Nervo, which thanks life for all of its blessings and what it has provided for us. Peering around the busy spot, which was still crowded at 5pm, the outcome of Mariana and Erick’s hard work is easy to see. Whether life has blessed them or through their own determination they have blessed themselves, the results are delicious and I can’t get enough.

Corazón De Maíz is open Monday – Wednesday until 6. Thursday – Friday until 8. Saturday until 6. Sunday (Mariana and Erick’s only half-day off) they close at 5. Closed Christmas and New Years Day.