TRENDING
Go to DASHBOARD > Appearance > Menus to set up the menu.
Navigate
3142 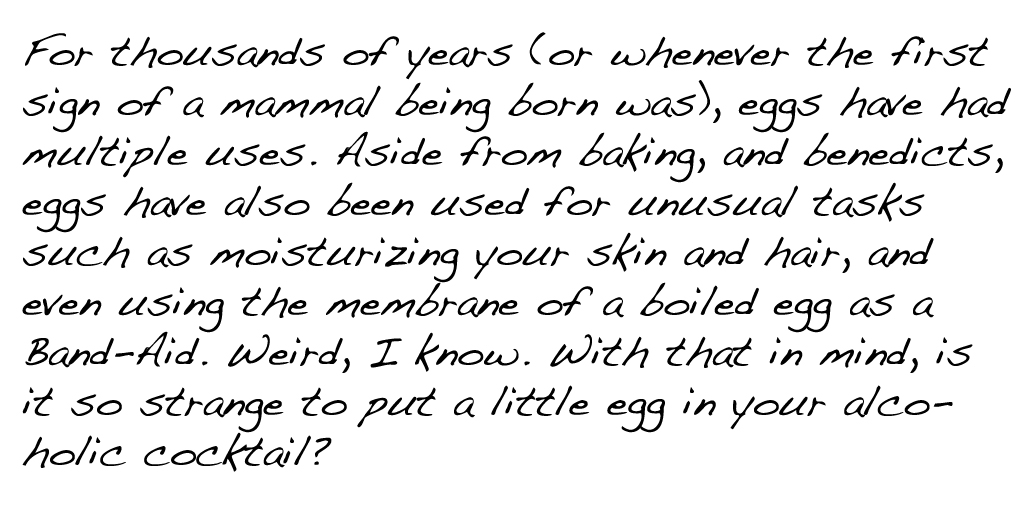 The amount of times I hear someone read a cocktail menu and say ‘Eggs? There’s no way I can have a drink with an egg in it”, truly saddens me. In cocktail heavy cities such as San Francisco, New York, Vancouver, and Chicago, this may be an afterthought, but in some cities, putting eggs in cocktails is still a trend that some may view as ‘gross’. So with that said, I put this article together because I want to help manage your ‘egg-spectation’ so you can enjoy some of the best cocktails you may ever have.

When you consider the fact that there’s a harmful primary liquid that goes by the name of alcohol in your drinks, it doesn’t really help your argument against eggs. Might I remind you that alcohol is a liquid that gives you the absolute worst hangovers (your body is actively rejecting it), contributes to those love handles, ruins relationships, gives you blackouts that lead to questionable decisions, and is the leading cause of drunk-texting your ex at 3am after the bar? Eggs on the other hand get your day started, and provide a rich source of protein, calcium and other essential nutrients. It’s a stretch in cocktails but, yeah, I just went there.

Before I jump into the fun stuff, we have to think of safety. Since there are bush-league words such as ‘salmonella’ associated with raw eggs, it’s important to not only store your eggs safely but also to make sure to wash your hands before, and after egg usage. My number one rule when it comes to using eggs as ingredients is to use the best product you can buy. If you wouldn’t eat the egg for breakfast, don’t put it in your drink. Make sure there are no cracked shells, check the dates of the container, and make sure it has been refrigerated. If you can find pasteurized eggs or UHT Egg-whites, those will be your best bet because it means the bacteria has been killed in the eggs. Make sure to keep all of these things in mind when selecting your eggs to use in cocktails.

Remember my friends, alcohol can kill most bacteria, but it can’t kill salmonella; only Chuck Norris can.

With that said, let’s dive in. 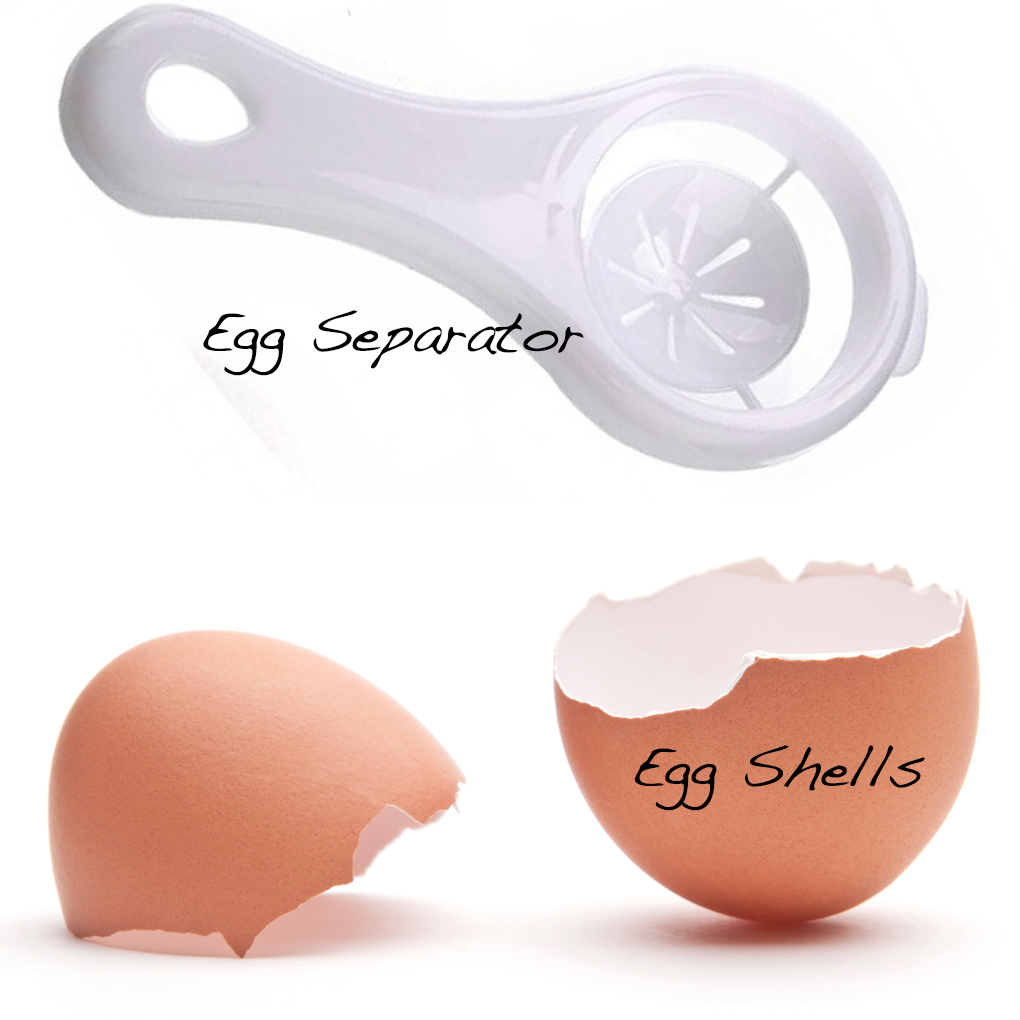 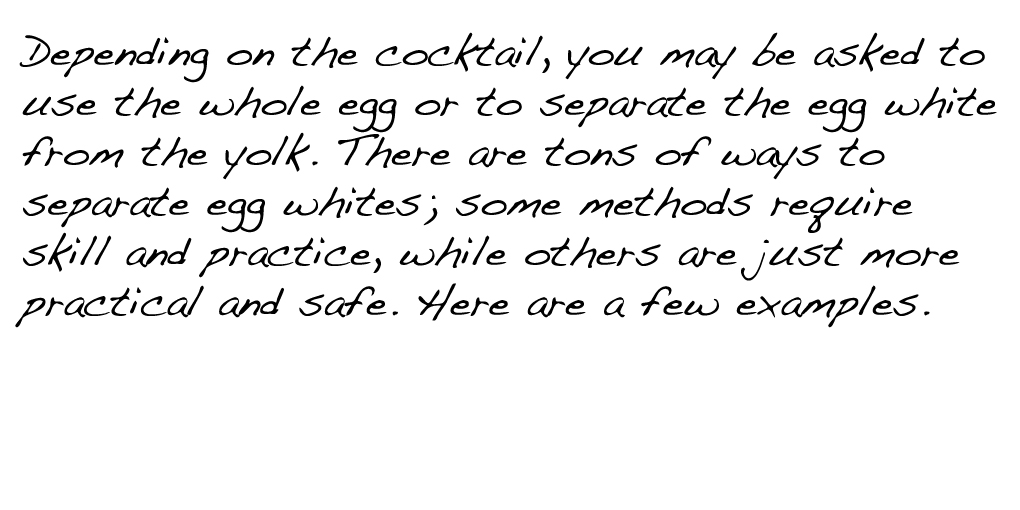 This is the most straightforward method for separating eggs. Place the separator over your mixing glass or shaker, crack the egg and place the contents in the separator. If you do it right, the white will drip into the glass leaving the yolk to its own devices. Keep in mind that the yolk may be slightly confused because it believed that they would always be together.

This is one of the most delicate methods to egg separation. The idea is to crack the shell in half, and pour the white and the yolk back and forth until the white drips into the mixing glass. If you’ve done it correctly, you should have a shell with the yolk and little to no white around the edges. If you move too quickly, or allow one of the cracked edges of the shell to hit the yolk, you may ruin the process with the yolk breaking and falling into your mixer. Keep in mind, bacteria may be on the egg shell so in terms of salmonella prevention, this may be the most dangerous. Make sure to wash the egg before you start separating.

This works in the same way that an egg separator does, but using different tools. Place the bar strainer or slotted spoon over the mixing glass, place the egg on top of it, and let the egg white drip into the glass. Keep in mind that you’ll need to thoroughly wash your strainer if you use it for any other cocktails. 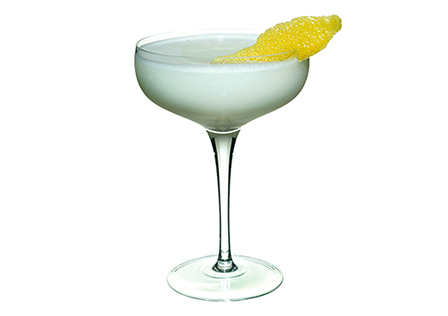 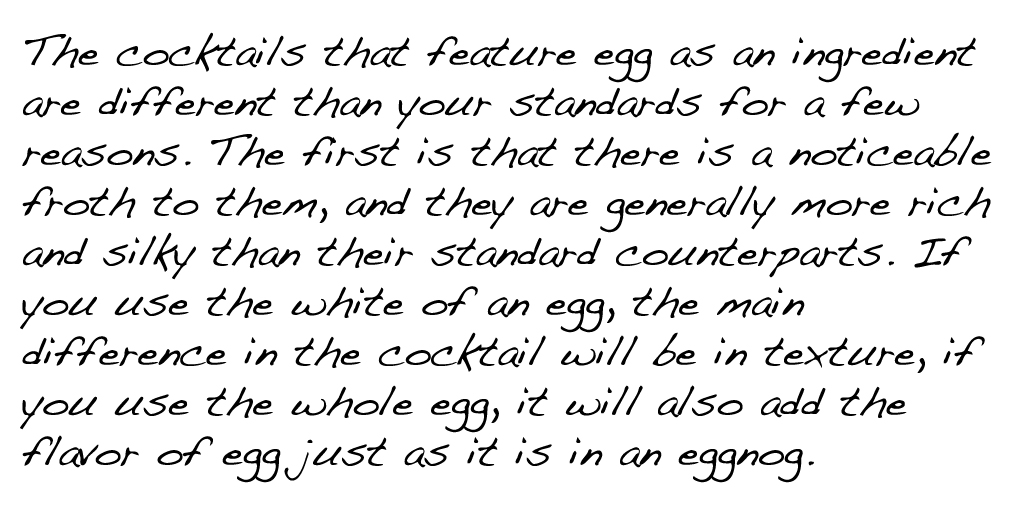 Sours are without a doubt the most consumed of all the cocktails made with eggs as an ingredient. In a sour, you use a base spirit, simple syrup (reduced sugar with water) or any other kind you can imagine, lemon juice, and egg whites. Popular spirits to use are whiskey, amaretto, and tequila. The Whiskey sour is said to date back to the late 1800’s and the garnish for the sour is traditionally an orange slice and a maraschino cherry.

Flip cocktails are a derivative of sour cocktails, but the difference is that flips use the whole egg instead of just the white. Flips also have lemon and lime juice in addition to the simple syrup. Flips were immensely popular before the prohibition started but for some odd reason they just fell out of favor. I know, some of you are screaming “BECAUSE THERE’S A WHOLE EGG IN IT!” but I want to believe that it was for other reasons. Maybe people couldn’t afford the whole egg anymore since it was the depression era? I’d be depressed too. Now that cocktails have made a comeback and more people are demanding that bartenders make Whiskey sours with egg whites and real lemon juice instead of that powdered stuff, the flip may have a chance once more.

Fizz cocktails don’t typically feature eggs as an ingredient unless it’s a spin on the Ramos Gin fizz from New Orleans. In the Ramos Gin Fizz, the chief ingredients are gin, lemon juice, lime juice, cream, sugar, egg white, orange flower water, and soda. Definitely an interesting concoction closer to a milk shake than anything else, but hot damn is it tasty.

The most popular drink with egg as an ingredient is the eggnog and it’s for good reason. Eggnog’s are comforting, and one of the absolute most flavourful cocktails you can drink. Eggnog’s are typically served around Christmas time, and since that’s the ‘most wonderful time of the year’, anything associated to it has to be wonderful as well right? Eggnog’s are typically made with rum, but they’ve been known to substitute brandy, flavoured vodka, and anything else that may strike your fancy. Vanilla extract, a whole egg, sugar, and heavy cream round it out.

With all of that in mind, you have a wide array of choices when it comes to creating cocktails with egg as the ingredients. Eggs pull the flavors of the cocktail together just as they do when we bake so you have a chance to get creative and think outside of the box. If whatever you create sucks, just try something differently like you would with any other cocktail. Half of the battle when it comes to creating drinks is realizing the amount of trial and error that comes with it. Have fun testing and being a scientist about it, and most importantly, don’t be afraid to get a little egg on your face.