TRENDING
Go to DASHBOARD > Appearance > Menus to set up the menu.
Navigate
3469

A story from Maria Arseniuk with contributions from Anton Mikov

“Are you with the press? Can you take my photo before those bastards shoot me dead?” asked the man on Maidan. It was Thursday, February 20, 2014 – the day that Ukrainian ex-president, Viktor Yanukovich unleashed a deadly assault that left nearly 100 non-violent demonstrators dead, many of them students. I was not with the press. I was just a girl with a camera determined to document the humanity and complexity of the 21st century’s most successful, yet controversial, revolution. 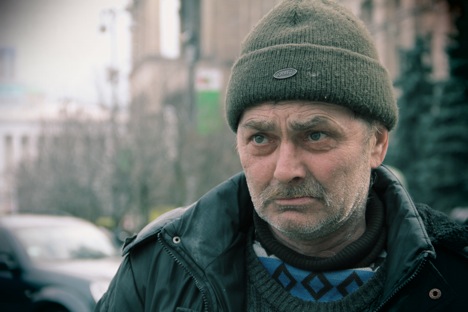 I arrived in Kyiv earlier that week armed with only a Canon and a goal: to capture the human nature of the EuroMaidan struggle – the pain, the hope, the resiliency and the perseverance of the Ukrainian people, and to present a perspective independent of Russian media; media which consistently portrayed us as depraved, radical, extremist, ultra-nationalist and fascist.

While I arrived in a moment of relative calm, the situation quickly escalated. In the end, hundreds were left dead, thousands injured. 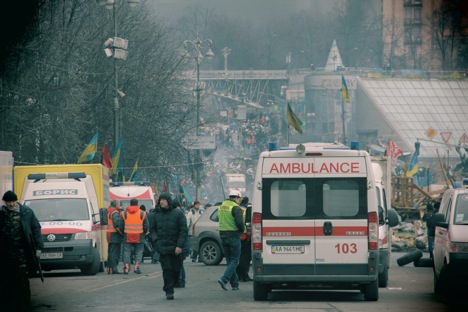 In telling this story, my story, and the story of tens of thousands of EuroMaidaners there needs to be an unlearning of the propaganda that the neoliberal apparatus has fed national and international media sources covering the events beginning November 23, 2013.

Many people, unfamiliar with the crisis, have asked: “All this? All this bloodshed over the rejection of an EU trade agreement?” I cannot be more clear about this sentiment: EuroMaidan is not about a mishandled EU agreement that ex-president Yanukovich abandoned on November 23, 2013 in favor of a $15 billion bailout from Putin.

It is not about European integration or accession; EuroMaidan was, and remains, about confronting the rampant corruption, oligarchy, extortion and dictatorship of the Yanukovich regime – a regime which laundered $70 billion in government funds into 18 private Swiss bank accounts while pensions and salaries plunged in a country where the average monthly income is $486 – the second lowest in Europe. Although the EU agreement was a catalyst for the initial student demonstrations from which EuroMaidan was born, it is the Ukrainian people’s yearning to move forward from a corruptocracy to a democracy – with or without European integration – that is the ideological foundation of this movement. 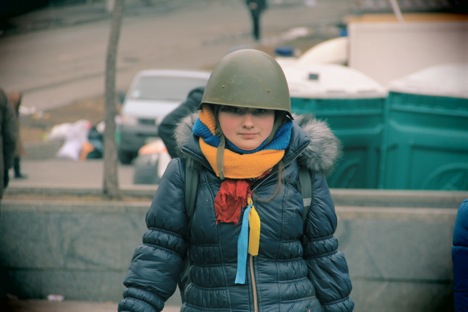 Initially, in the early stages of EuroMaidan in late November, students came out to demonstrate against Yanukovich’s unilateral dismissal of the EU agreement. They were beaten, and dispersed, by government forces. The following day countless others came forward to stand, symbolically and physically, with the student demonstrators. One of those people was Anton Mikov.

“I was at work, and all the information was coming in via Facebook and from friends who were downtown,” he would later tell me. “I couldn’t believe that an entire city could step up to defend 200 people. I arrived in the evening, when things had more or less calmed down. I came out not for European integration, but against the leadership who considered themselves above the people. Yanukovich believed he had the right to determine destiny. I came with my friends to prove that the people are the power.”

As November slipped into December, EuroMaidan grew in size and influence. 200 people transformed into 20,000 people. Some of them stood for EU integration, some against it, some were neutral. All of them stood for the freedom of Ukraine and its people. As EuroMaidan grew, so did the initiatives of the demonstrators. Many, including Anton, were involved in multiple strategies: “I attended many peaceful meetings by the Democratic Alliance, and I drove people around as part of AutoMaidan, to the homes of those in positions of power, to show them how the ministers live while our hospitals crumble. For one of these acts of resistance, outside of the gates of Yanukovich’s palace in Mezhigyria, my car was set on fire. When it was relatively calm I built barricades with the self-defense units, and with the Right Sector and other nationalists I defended against the attacks by the Berkut and internal military forces.”

By the time I arrived in Kyiv on February 13, 2014 EuroMaidan was approaching its third month. Ukrainians – from Kyiv, Lviv, Ternopil, Lutsk, Donetsk, Kharkiv – as well as Georgians, Belorussians, Armenians and a handful of Russians had already mobilized a resistance to government forces. Men and women, students and professionals, young and old, Christian, Jewish and Muslim guarded the barricades. They protested, peacefully, and unarmed. They stood together, united, as a vanguard for social justice.

By then the first four victims of Yanukovich’s onslaught, including Yurij Verbytsky a programmer with a PhD in mathematical physics, had been killed. Verbytsky had been kidnapped from his hospital bed, along with fellow EuroMaidan activist Ihor Lutsenko. His body was later found, tortured and mutilated, in a forest. The last thing that Verbytsky said to his brother was, “We are at the point of no return. Either the government destroys us or we will destroy it. I have made my choice.” Many, alongside Verbyskty’s convictions, made the same choice. They continued their fight against the totalitarian regime, against the propaganda machine, against corruption that enveloped our country. And I continued to photograph them – determined to preserve their humanity, their identity, their dignity and their struggle for a fair and free future. 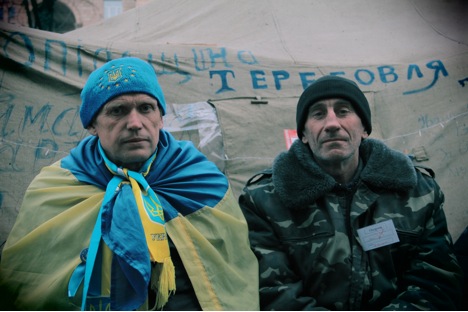 Within a matter of days, the situation in Kyiv intensified. On February 18, 2014 the drastic escalation that would mark the revolution for years to come began.

Berkut, the state controlled riot police, armed with water canons, grenades and bullets, attacked demonstrators indiscriminately. The EuroMaidaners, armed with little else but cobblestones uprooted from the main plaza, bricks, and Molotov Cocktails, stood their ground. I left that morning headed to Maidan – only to arrive to a closed subway station, with people helplessly milling around it. “If they’ve closed the subway, you know something is very wrong” one older woman speculated at the door. Something was very wrong – Berkut had started silencing people with bullets. Closing the subway ensured that more activists couldn’t join, but more importantly, it ensured those under attack had no escape. I returned home later that day. The events of the day were transpiring faster than news sources could report it. Social media kept us informed. Fixated on Twitter and Facebook, calls for volunteer drivers, blood donors and fresh water collection flooded my newsfeed. Kyiv was on fire and the world was fixated on Sochi. 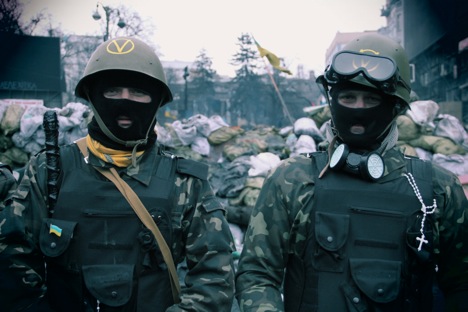 On the 20th my father, stepmother and I left in the morning for the blood bank. Blood reserves were becoming depleted and the injured were arriving in hospitals by the hundreds. Leaving the hospital we stocked up on cases of water and drove down to Mihailovska Square where volunteers were collecting essentials: water, blankets, generators, medicines. 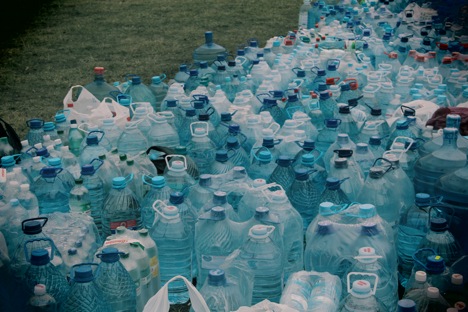 The sound of gunfire pierced the air before I even made it to Maidan that afternoon. As I got closer, people were running, yelling “Snipers! Snipers!” Indeed – Yanukovich hired snipers, perched upon hotel “Ukraine” to fire into his own people. As I got into the heart of the protest, a young man not too far from where I stood, took a bullet to the chest. Volunteer medics rushed to him, risking their own lives to save his. The atmosphere was one of pure panic and chaos – raw emotion marked the faces of everywhere I looked. As the end of the day approached the death count neared 100 – Heaven’s Hundred. 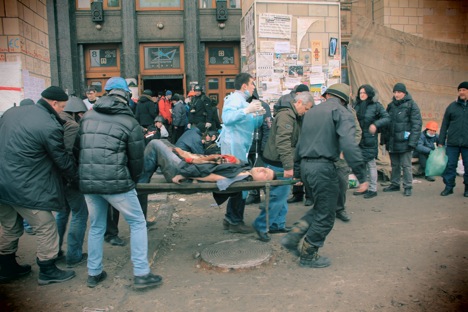 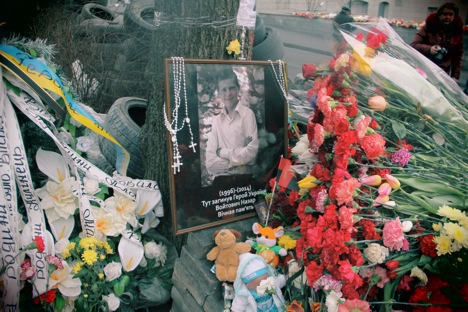 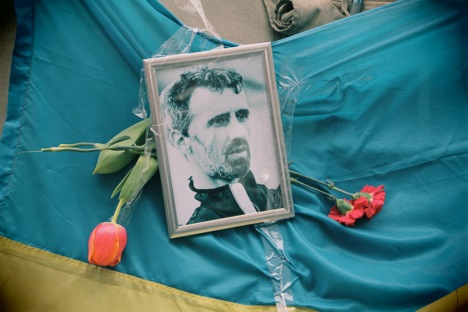 Undeterred, we all came out again to Maidan the following morning. Someone asked me if I wasn’t scared. Of course I was scared. But, I choose fear over intimidation. Fear over inaction. Fear over apathy. Fear over helplessness and certainly fear over complicity with injustice.

As Yanukovich fled to Russia and was replaced with an interim government backed by the opposition, Ukrainians were left with the reality of recovering from one of the bloodiest revolutions in modern European history. We were left to heal and rebuild in the midst of tragedy, and we were left to flounder in an economy on the brink of default. And we will. Because this is a story of perseverance. The sacrifices of the Heaven’s Hundred were not, and will never be, in vain. While the mood remains somber, we look to the future with a glimmer of hope, knowing that the people and events of EuroMaidan will forever shape Ukraine.

I asked Anton, if you ever had the chance to meet and speak with Yanukovich, what would you want to say to him? He replied not with anger, nor with vengeance – but with a knowing calmness to his composure: “There was a film, ‘Good Bye Lenin!’  about the unification of Germany and about the people who were able to reclaim their country and to become one community. If I ever met Yanukovich, I would tell him “Good Bye Viktor!”