TRENDING
Go to DASHBOARD > Appearance > Menus to set up the menu.
Navigate
2160 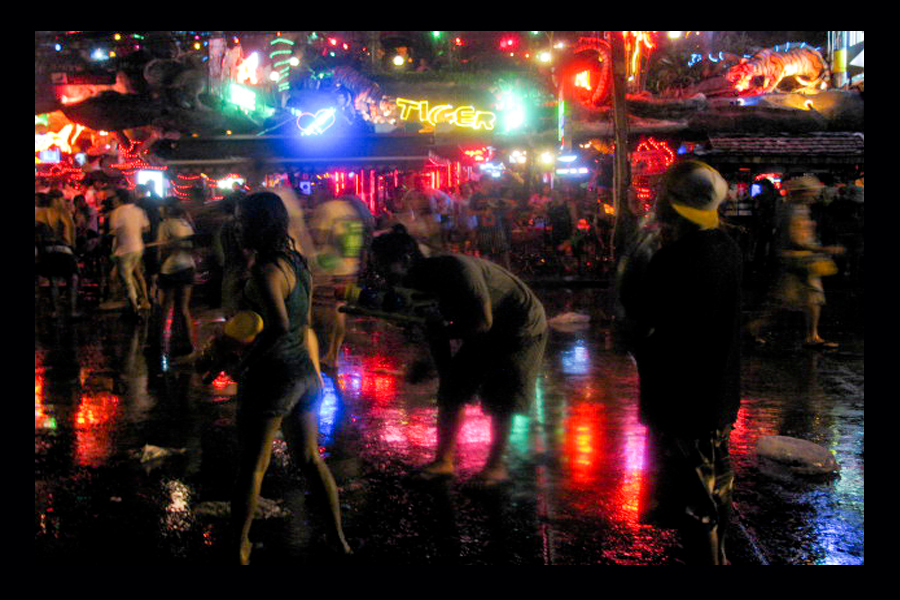 New Years Eve, a day of new beginnings. It’s a day meant to remember your accomplishments from the past year, forget the ills, and to look forward to a clean slate of possibilities. When we celebrate the New Year, we do so by attending lavish parties, dancing the night away, and secretly hoping that we get that New Years kiss when the clock strikes twelve. For many, New Years holds immense meaning and we place tremendous importance on being at the right place at the right time. The disappointment we hold when the night doesn’t go well can stay with us from year to year. Rather than get out there and enjoy the following New Year, we often bask in the afterglow of a previous New Year that failed us. We go out with the feeling that our night will never meet our expectation, which in effect may represent our feelings toward the year to come. 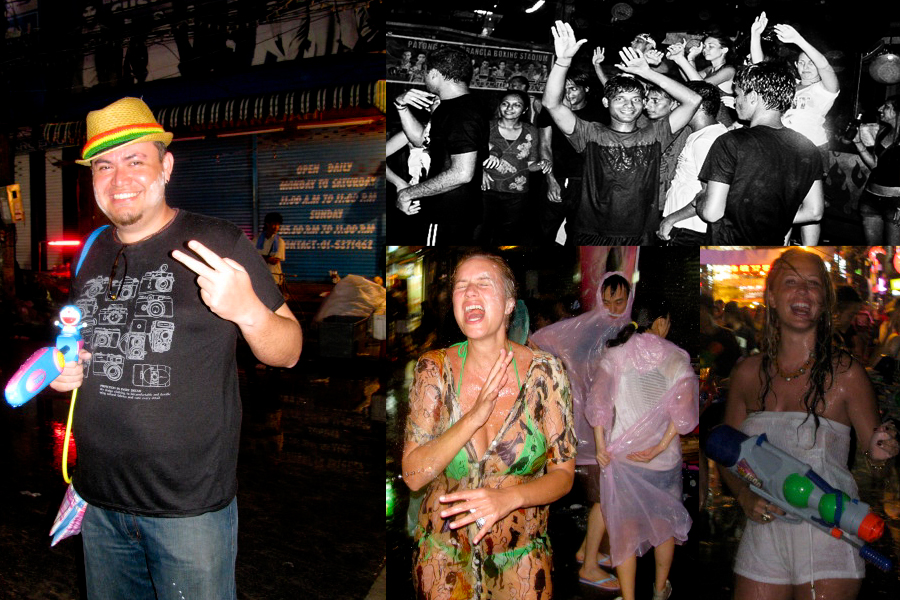 Imagine a New Year celebration that focused more on fun and a renewal of hope for a great year. A single cultural event binding the entire country together, to the point that no matter where you go, everyone is celebrating with an equal level of jubilation. The feeling created by such an event is unlike any you will ever experience. This is how New Years Eve is supposed to feel and it’s perfectly encapsulated at Songkran, the Thai New Year.

Songkran was formally the beginning of the Thai calendar on April 15th. Since January 1st has become the first day of the international calendar year, Songkran has become more of a cultural festival ushering in the rainy season to wash away any misdeeds of the past year. In southern Thailand, Songkran generally lasts one to three days but in Chiangmai and other cities in the north, the water festival lasts up to a full week. In the past, Songkran was more of a quiet religious observation. It was a day to pay respect to the monks, and gently pour fragrant water over statues and monuments of buddha that passed through the streets during a procession. The newly blessed water that ran off each monument was collected as it ran off the monuments and gently poured on elders and other observers to pay respect. Songkran was also a day in which people would collect food for the monks and bring sand to their local temples in order to rid their lives of the dirt they had accumulated from the year. Today, Songkran has lost that quiet religious observance. Though many people still treat Songkran as the religious festival it is, the inclusion of foreigners and more of a fast and easy lifestyle has transformed Songkran into a countrywide water fight unlike anything you’ve ever seen. 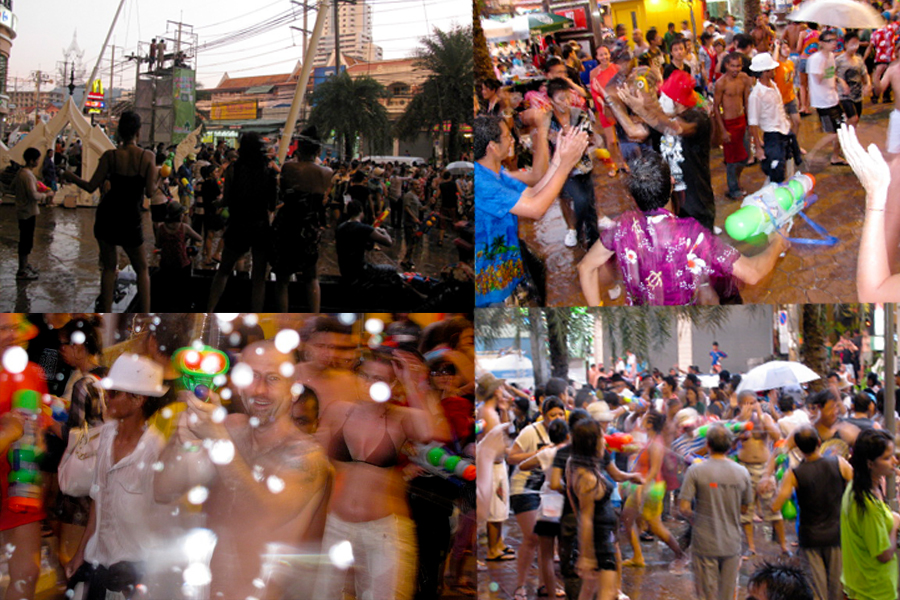 Imagine running through your local mall and shooting a security guard… with a super soaker. Running through a seedy Thai massage parlour and shooting someone down as they’re about to get their ‘happy ending’. Walking into a restaurant as the Maitre D is charming his table, diving onto the restaurant floor and spraying him in the back with water. Imagine doing all of these things with no repercussions and no apologies; only a simple Happy Songkran is needed to justify these actions.

If you walk down any street, you are immersed in a massive street party of dancing and soaking each other down with reckless abandon. Thai’s and foreigners band together in a celebration of peace and hope that their new year and yours will be everything you’ve ever wanted it to be. People line the streets and launch buckets of water as you speed by on your motorcycle, scooter or car. Trucks with water hoses drive through the streets packed with an army of people shooting recklessly with their soakers, launching buckets of water, and using industrial sized hoses to soak the crowds. People swarm the ‘refill water stations’ to ensure they have enough ammunition to spread the love. In this environment, if you don’t have any ammo, being a sitting duck is the best and worst thing in the world because you’ll be swarmed by ‘well-wishers’ in an instant. But in true Songkran fashion, it’s all in good fun and you’ll never feel that good again. 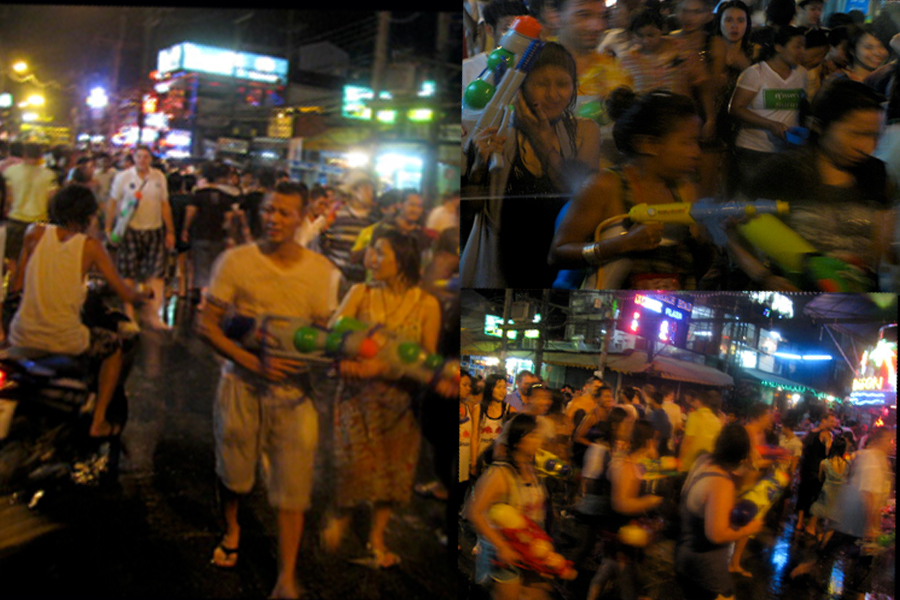 For the duration of the festival, you feel as childlike as you ever have and you can’t be surprised if your cheeks hurt from smiling so much. Songkran is the perfect representation of the happiness one would feel in the country of Thailand. The people are always smiling and have a way of not taking life seriously that is charming and incredibly infectious. It’s festival’s such as Songkran that leave you feeling happy to be a part of humanity. Waking up each day with the knowledge that festivals like this exist in the world, is enough to motivate you to get on the road as soon as you can.