TRENDING
Go to DASHBOARD > Appearance > Menus to set up the menu.
Navigate
2257 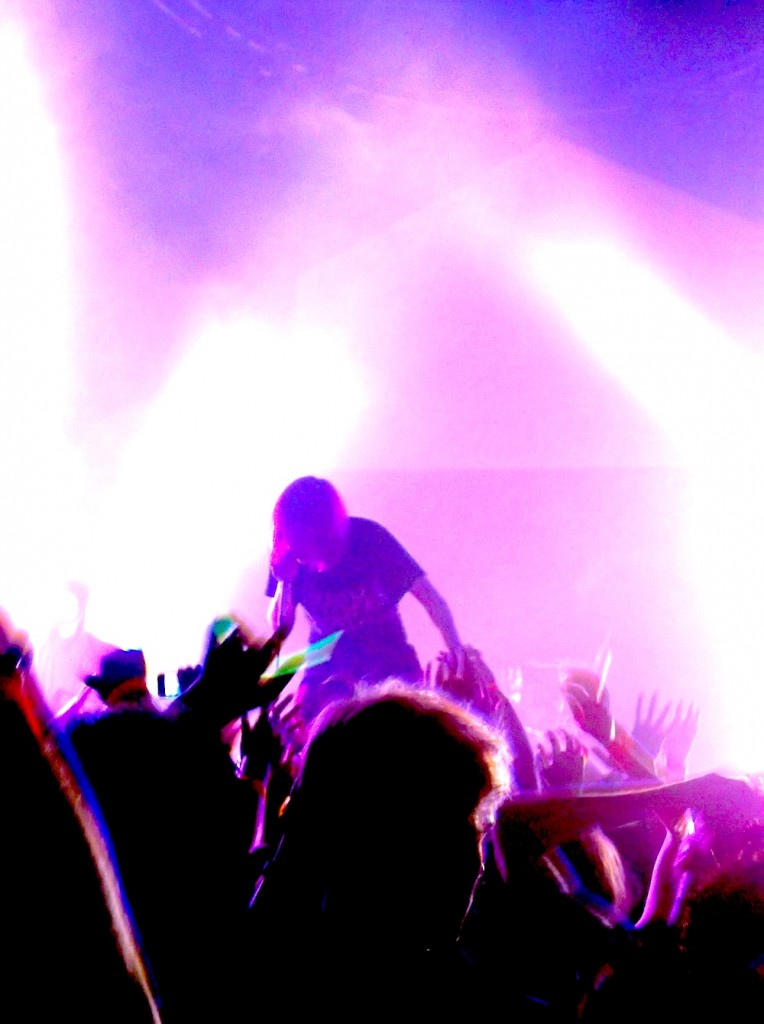 There is no shortage of aging churches in the post-industrial neighborhood of Millvale, Pa. – located just across the Allegheny River from Pittsburgh. On any given Sunday you’ll find Catholic parishioners singing psalms of faith, love and forgiveness inside each place of worship… with a single exception. One of these centuries-old, former-church buildings is now occupied by Mr. Small’s Theatre; on Thursday night the unique concert venue offered an entirely different means of reverence as the dark-wave electronic band Crystal Castles took the altar for a sold-out crowd of 650 followers. The Toronto duo enchanted the pious venue with unique persona, music and production while it hosted a stunningly malevolent musical ceremony; yet one that was not without its own sins.

Throughout the night, Crystal Castles – particularly lead singer Alice Glass – embodied a reckless, don’t-give-a-fuck attitude. On numerous occasions Glass worked her way off the stage and into the crowd (I say worked because she didn’t walk down the stairs to join her fans; she walked on top of her fans). In crowd-surfing fashion, Glass toed the masses for the strongest hands before being carried out on her, stomach, back, knees and feet as she barrel rolled, crawled and stood on the crowd singing the whole time. With her feet on stage, Glass skipped the solo cups, pilsner glasses and any leftover sacramental wine; she chugged straight from a bottle of Jack Daniels. She even shared some whiskey with the patrons by spitting and spraying it into the all-ages audience in a somewhat reverse and perverse blessing. Glass paid even less attention to the “No Smoking” signs than the liquor laws, puffing more and more as the show progressed. The foreboding glow of the demon queen’s cigarette was at times the only light emanating from the stage. 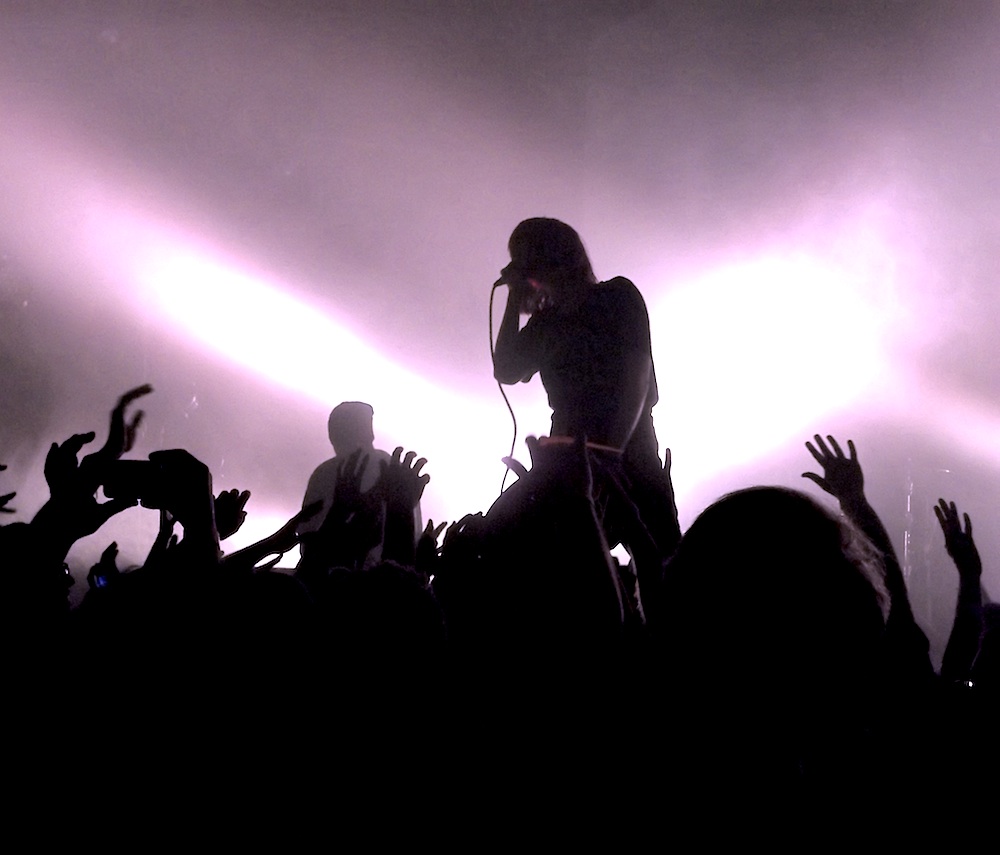 Such oppressing darkness was not the norm, but it played a role in the most important element of Crystal Castles’ performance: the atmosphere. Combining their punk rock persona, vivid electronic music, live percussion and a blazing, blinding light arrangement, the pit became a luscious place to dance – not just to move my hips, but to become fully possessed by each beat, ring and screech. My eyes closed, I was lost among both an unholy sound and a once-divine house. Yet as “Crimewave” startled me to attention, strobe and laser lights zipped through my retinas. However, there was never enough light for the room to be considered bright. Producer Ethan Kath maintained his eerie persona half way between the darkness and the light where you never could be sure if he was staring right at you. I awake from another trance for “Celestica,” and either Glass or the shadow of a sinning banshee is raising the microphone toward the building’s steeple as a sacrifice to some dark idol. An environment as such I imagine could only be brought when savoring a bite of forbidden fruit.

It wasn’t all praise be to Crystal Castles in that old church hall. There weren’t any sing-a-longs on this night in Pittsburgh. Not that you could ever understand the manipulated vocals from Glass in any venue or studio, but you could barely even hear her at all. As the band ended their main set with the Platinum Blonde cover “Not in Love” from their second LP, I was reminded why I cast out from my iTunes the version with Glass on vocals in favor of the recording with The Cure’s Robert Smith. Glass’s singing outside the studio lacks both the authority and sensitivity to excite a dance party or conjure up deep emotions. The show might as well have been instrumental. With Kath synthesizing the vocals, Glass would be free to bend, or break, the rules with her antics. 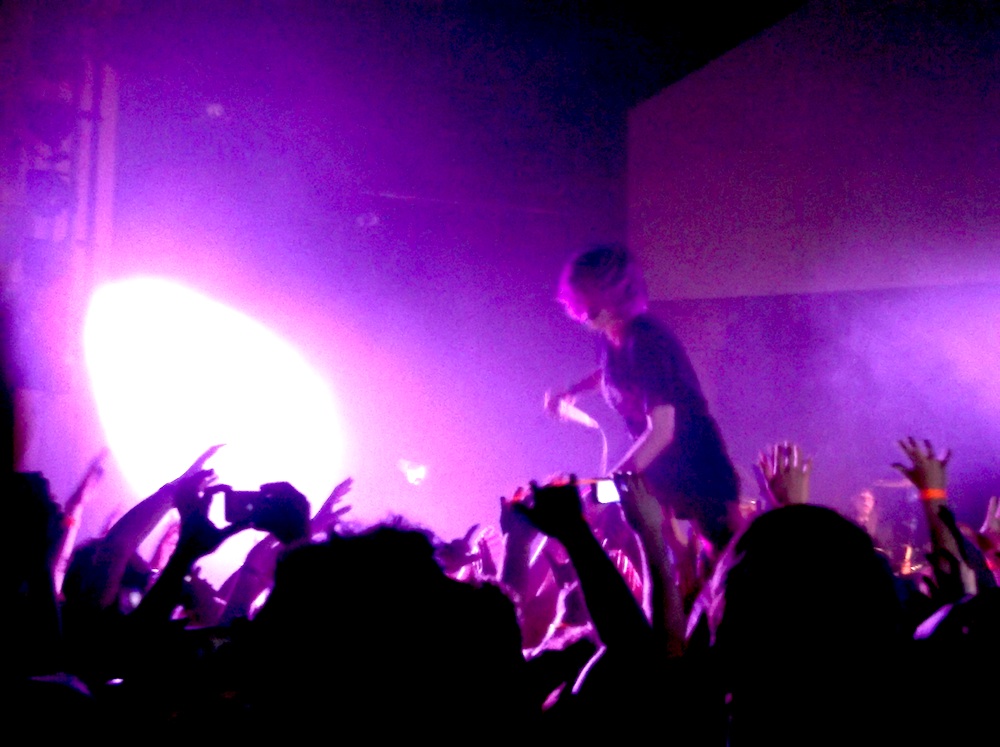 Crystal Castles’ brash attitude was bordering on negligence before even taking the stage. With nearly an hour passing between the end of the opening set and the duo’s appearance, the beyond-restless congregation had plenty of frustrations. However, with an emphatic entrance, (III)’s lead track “Plague,” not only did the crowd launch into a frenzy, but everyone also catapulted ten feet closer to the stage. The wicked dance rave commenced and the crowd was now a cult at the band’s mercy for the rest of the night.

When the house lights came on, normalcy returned. Demons morphed back into human beings, but headed into a night that was pleasantly darker than usual. Even though Crystal Castles left me wanting more from a set that was vocally sparse and short of 90 minutes in length, I left fulfilled having channeled my inner darkness during an evening of bad ass attitude, spiritual dance, mesmerizing visuals and, of course, tantalizing electronica from Toronto’s Crystal Castles.