TRENDING
Go to DASHBOARD > Appearance > Menus to set up the menu.
Navigate
3126 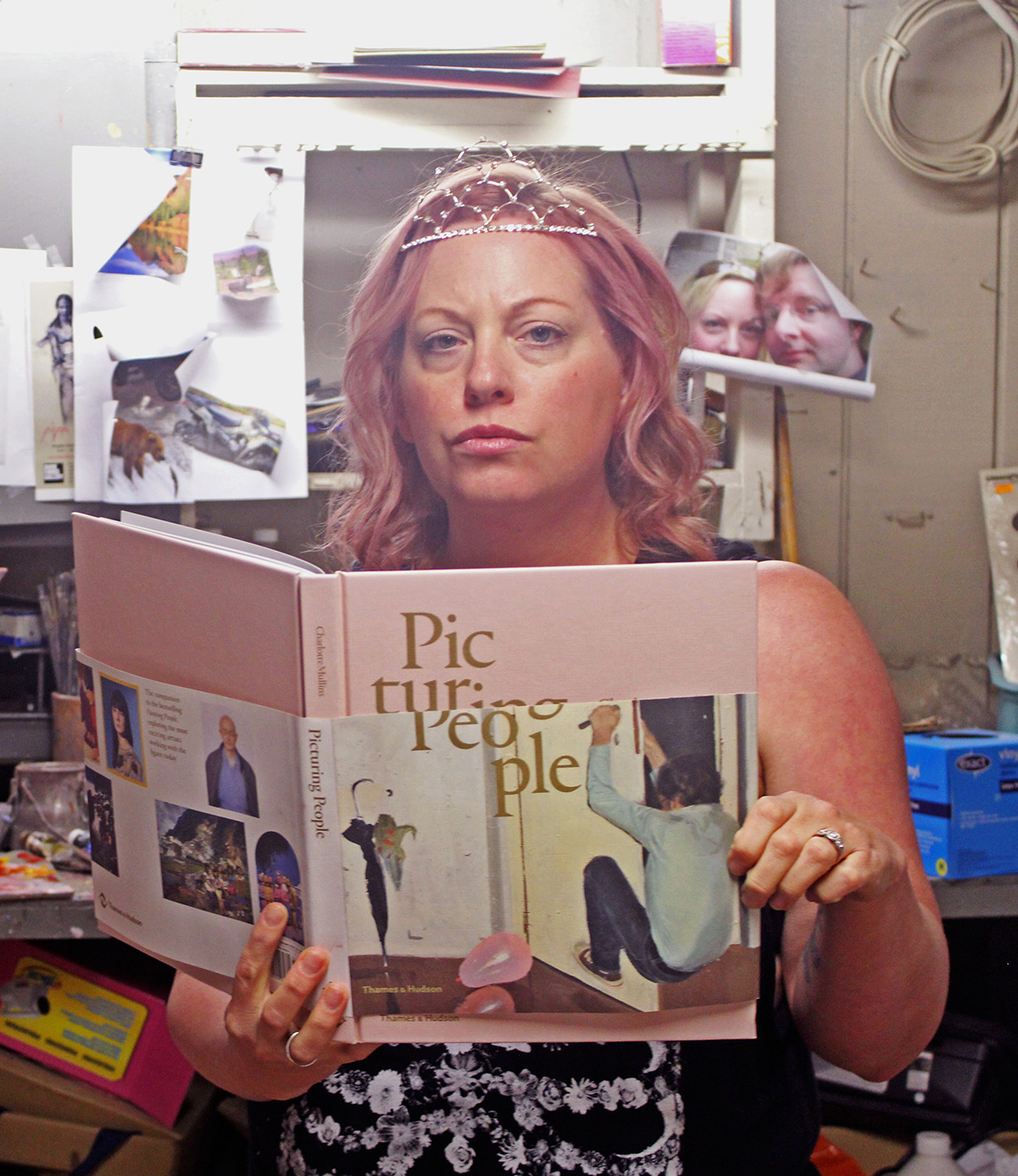 Nature versus nurture. It’s hard to say how much influence each has on who we might become, but for some of us, the way we are brought up has surprisingly lasting implications. Consequences that last a lifetime, impressions that might recede then return, adding inspiration to the way we live or how we express ourselves. For Sharon VanStarkenburg, at least, this has proven itself to be true.

The imaginative Ottawa artist has been working for years on this tension through her work, which has run the gamut from high-concept multimedia pieces to more straightforward portraiture painting in recent months. But she has a throughline. “I would say that my work has, since the beginning, been about women’s experiences,” she tells me as we sit in her organized and calming living room, full of warm colours and soft furniture. It’s the kind of room that makes you feel comfortable at once, which allows us to quickly fall into an easy rapport.

VanStarkenburg began her Master’s at New York University, which she says was a big chance for her, allowing her to focus completely on her work and fully immerse herself within her own mind. She says she’s still feeling the effects of that period in her work now, recalling the discipline necessary to be working 12 hours straight every day in the studio. “It taught me a lot,” she says. She couldn’t finish, however, and I asked her why. “Divorce got in the way, with a young child in the mix. It was all prohibitive financially.” This kind of precarious balancing act, familiar to many artists, has followed VanStarkenburg throughout her career. Ottawa’s art scene, as passionate as it can be, is also struggling, she observes. Several galleries have closed in recent years, including Le Petit Mort Gallery where VanStarkenburg has had her work shown in the past. “I appreciate all the people that do support me, I just wish the community as a whole was more supportive because it can really feel like a niche,” she explains. “It’s tricky. But you also see so many people, especially young people, doing a lot of amazing work, so you would think that would invigorate the city.”

To be fair, it has never been particularly easy to be an artist in economic terms, so VanStarkenburg has learned to adjust. She has a day job, and also teaches at the Ottawa School of Art. “I love it, and when I’m doing that, people will often come up with problems where I need to research to help them, or come up with something for them in the moment. It’s very interesting and keeps me on my toes,” she says. That kind of spontaneous activity is reflected in her work, which has evolved organically through different styles and methods as she responds naturally to her impulses and lets the work take her where it wants to go.

Her latest work, a series entitled “Girl Alchemy”, will be shown as part of a solo show at Wall Space Gallery in early 2017, and she will continue to keep busy in the fall when she begins her Master of Fine Arts at the University of Ottawa. 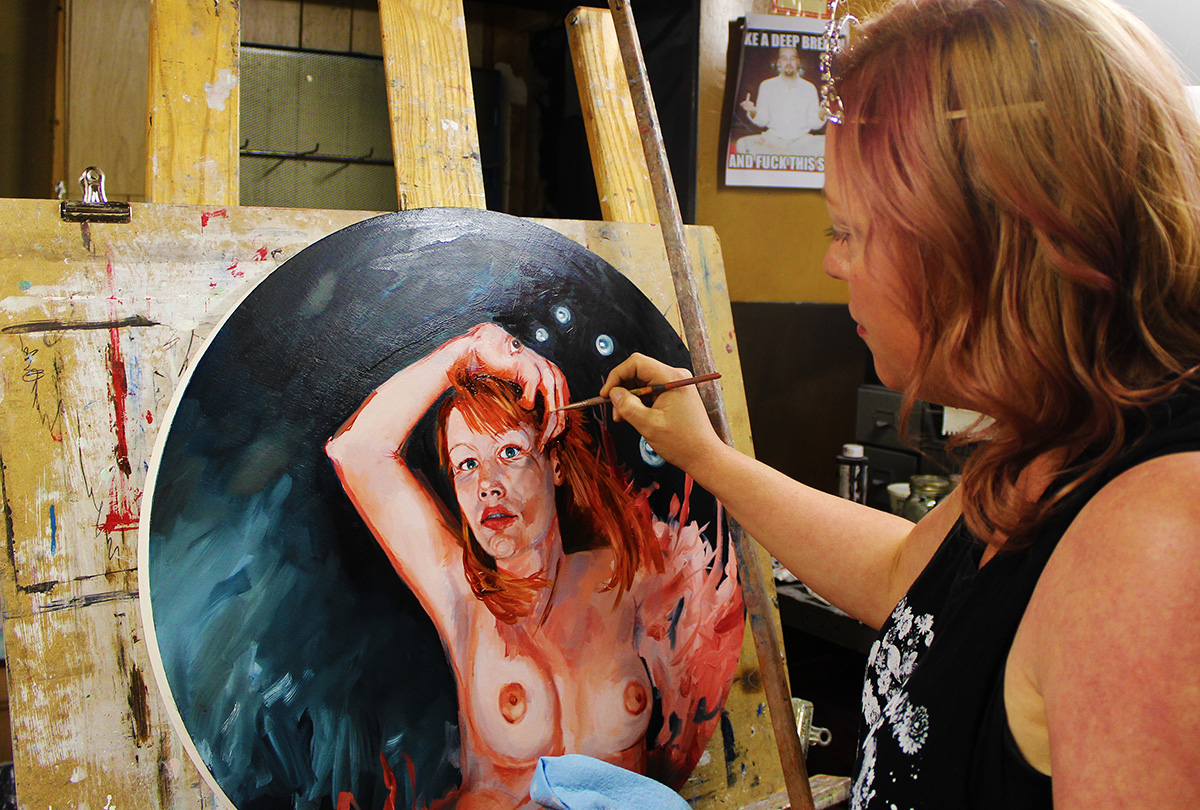 How has a shift toward more overt politics in your work occurred over time?

Related to my time at NYU, one of my professors suggested I stop using collage and just paint. It took me quite a while to take that advice. There’s something about collage, it creates meaning because it’s already laden with all these other meanings. When I let go of it, something about the power of the paint, and focusing on new meanings, gave me a lot of courage to be more forceful with my work, and with how I painted.

I’ve been very interested in feminist theory, that has been an undercurrent in my work, sometimes more overt than other times. It’s not meant to be the only message, though. It’s about narrative, women’s stories are human stories. 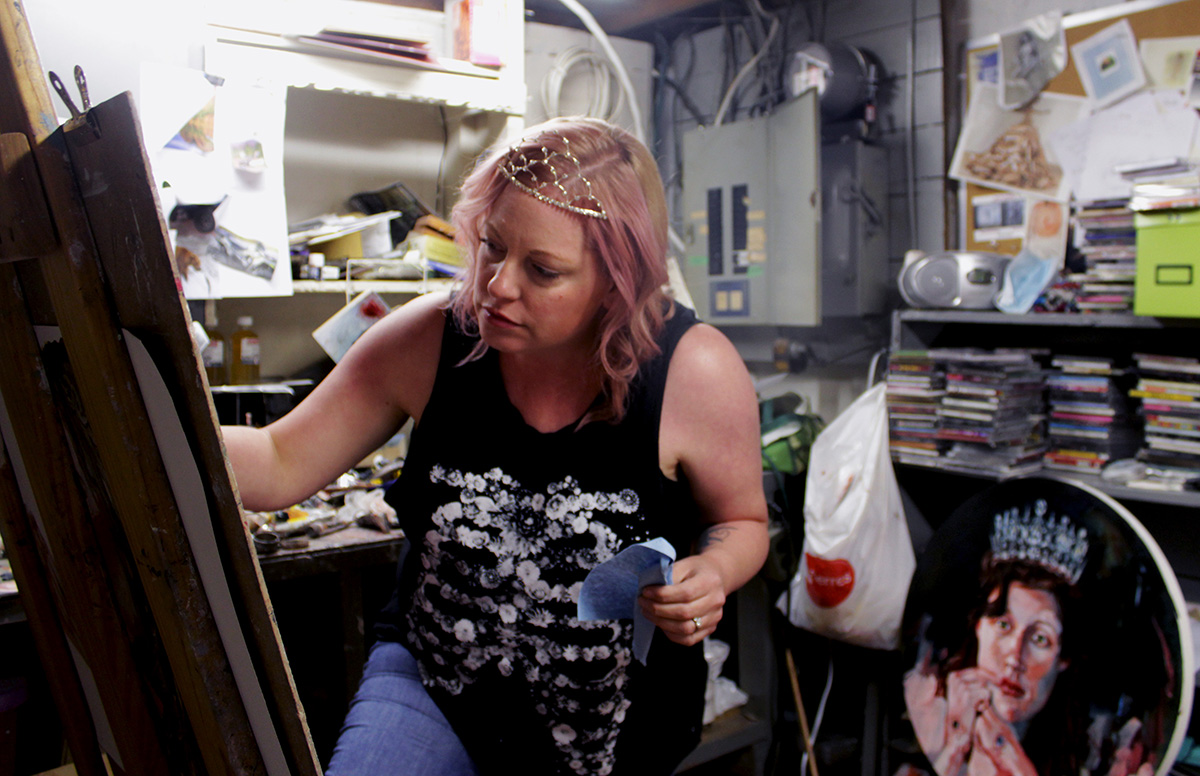 There’s often so many different elements in one image of yours. How does that happen, and do you ever worry about overwhelming the viewer?

I do let it be open to interpretation, and I find that when you see recurring things, themes, that come back in a series or through years, it starts to mean something new. It can be overwhelming, but I think people enjoy the narrative and the interaction of the elements. It’s true that my work is becoming more singular in its imagery, which is odd for me, but it’s what’s happening in the studio.

With your focus on narrative, will an audience feel you’re forcing a certain story to be told? In my head, there’s a tension between artistic interpretation and the political message you may have.

Because of my imagery, there’s certainly a theme and something to be understood. It’s not forcing something, but there is a framework. I don’t necessarily consider my work political, I consider it humanist. I’m exploring the psychological side of human experience, personal histories, gender, the visceral expression of these things. I would veer away from the label of “political”, although there are certainly messages for things that we need to have conversations about. It might spark a conversation but the work itself is not the conversation. 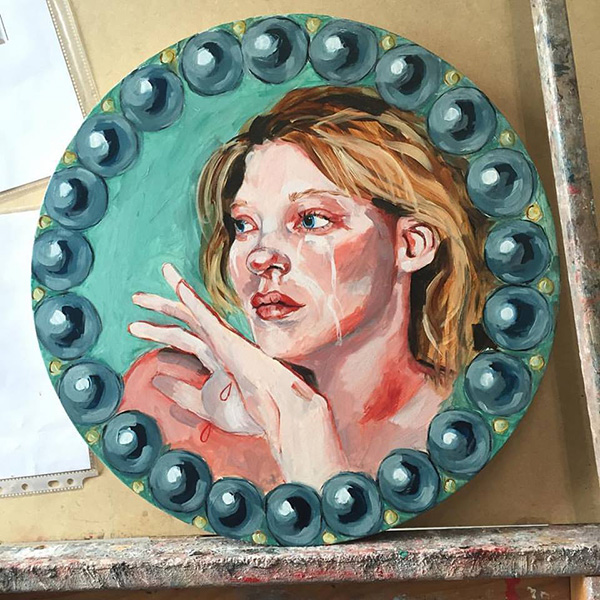 Your work engages with body horror, and how that works with the female body.

My newest series is called “Girl Alchemy”, with the stigmata and eyes on the hands and everything, a little deformed. The progress of my work often has seeds from the old coming to fruition in the new. But it’s always in a new direction. It’s called “Girl Alchemy” because I’m taking negative or even neutral experiences and processing them in some way, transforming it into something new. Which is obviously conflated with the transformation from girlhood into womanhood. There’s the idea of the diamond, made under intense pressure, and they’re often coming out of different orifices on the body in these paintings, emerging based on the alchemy in their body and mind.

When I’m in the studio, you have to let go of the interpretation and leave that stage for later. A lot of it just makes sense to me as I go along.

“Girl Alchemy” is experimental for me, and I’m in the thick of production. It’s a lot of larger-scale portraits, which I’ve never really done before, which is slightly uncomfortable for me but I’m going with it. These are young women on the brink of womanhood, taking their experiences and turning them into something else, maybe it’s beautiful, maybe it’s not. They’re processing it.

Do you get tired of people like me asking you to analyze your own work?

Not necessarily. I enjoy writing and describing everything, but the production part needs to be separate from that. You can’t be thinking, “How can I explain this?” because that can stop everything. For example, I have this glimmer of an idea, but I don’t know how it relates to anything else or how to explain it to people, so I feel like shutting it down rather than exploring it anyway.

How did your interest in feminist theory begin?

I grew up in a Calvinist, Puritanical family in Pembroke, Ontario. I love my family, but it was a strange environment to grow up in. I questioned things early on, to everyone’s chagrin. Things just didn’t make sense to me, [it was] a very bizarre and sexist environment. I didn’t listen to the radio, wasn’t allowed to watch TV, and didn’t have much engagement with the secular world until high school. Even though all the messages around me were about women following men, instinctively I felt it didn’t make sense, despite not knowing anything else. So I found literature, and art, and in university everything really took off in that way. That’s where my art practice started, and it grew at the same time.

Feminism has been somewhat commodified, but I also feel it has become more naturalized. Looking at Instagram, in magazines, the way it has been presented lately is as common sense, instead of being put in academic language. At least it is mainstream and part of the vernacular in everyday culture. I appreciate that, because you couldn’t even access it if you wanted to when I was young, it was just in the universities. There will always be people who try to monetize things, but we’re really at a tipping point. 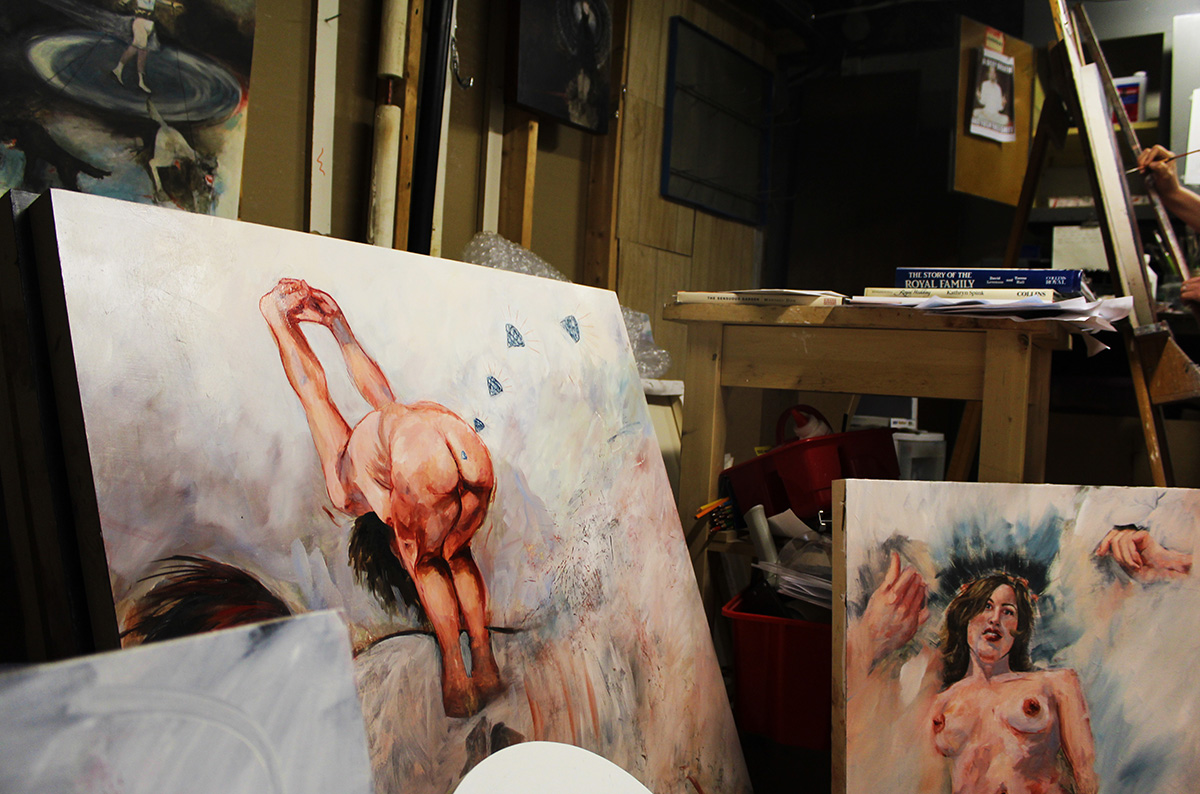 That’s interesting, because I’ve been thinking a lot lately about mental health advocacy, and how something like #BellLetsTalk [Bell donates 5 cents for every call and text made on its network on Jan. 27th every year, as well as for Facebook shares and tweets using the hashtag] is great, because it puts all this money toward something I care about, but it also acts a giant PR win for Bell as a company and ultimately serves a purely capitalist function.

You have to think, though, if it benefits someone who otherwise wouldn’t have this information, it’s gotta be a net positive.

In your work, there’s often a contrast between power and vulnerability, beauty and ugliness. Where do these dualities come from?

That has always been part of my practice. I don’t question that, and I suppose that’s because that reflex is natural. Especially when I’m representing these young women in this series, I’m trying to look at, is this what I want or is it what’s expected of me? Thinking back to me as a teenager or young woman, I didn’t know what actions were self-motivated or which were expected. The beauty and the grotesque reflects that. I want people to come closer, to think they know what they’re looking at but second-guess themselves. 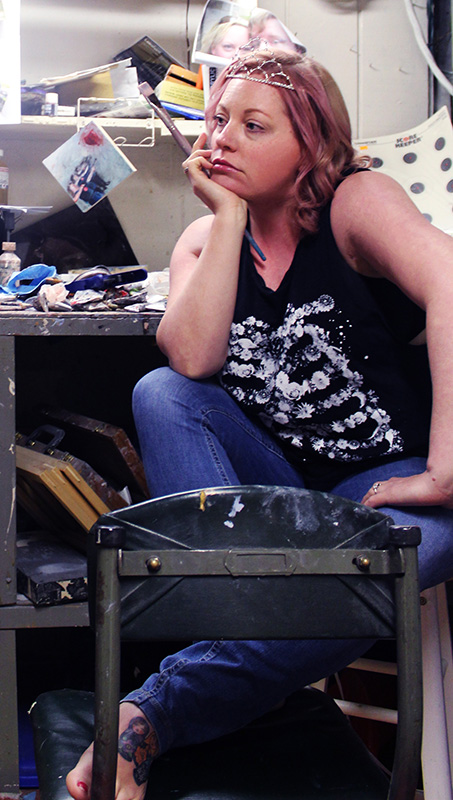